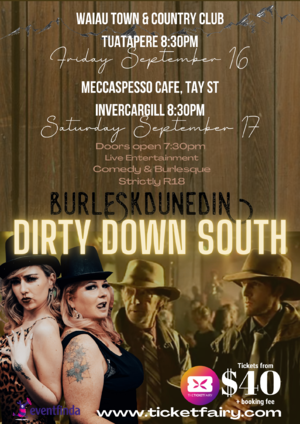 TopInfluencers
UHH Yup! You read that right, Burlesk Dunedin is heading to Tuatapere after some local demand.
Burlesk Dunedin is the home of Burlesque Shows in the lower South Island, with National and International Award winning performer's Jersey Rhein & Verona Vega at the helm.
These shows are notorious for bringing not only Burlesque but Drag, Circus and Comedy encapsulated into one show to a town near you!
They conquered Patearoa and opened the eyes of that small town so now they're heading somewhere slightly bigger n going to Tui before a second show in Invercargill.
Both Jersey Rhein & Verona Vega are country girls at heart and love coming to these small towns with an array of misfits! Stay tuned to see who's coming along for the ride!
Doors open 7:30pm and the show starts at 8:30pm. Time to get a couple of sevens of Speights into ya n be a part of the Draw at Waiau Town n Country Club before we get underway with some live entertainment!
Show is strictly R18, contains nudity, foul language ad sexual references.
Tickets are $40 + Booking fee from www.ticketfairy.com
TopInfluencers