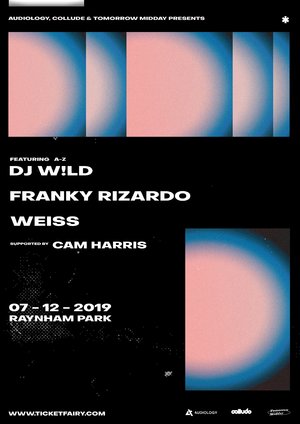 House heads, this one is for you. Two heavy hitters of the house music world, DJ W!LD the man behind the summery hit 'Love Every Day' - https://bit.ly/2VNCBoa, plus the return of a big player in the new generation of artists, under the Defected Records label Franky Rizardo and if that isn't enough to get you going we've just added Weiss the man behind last summers anthem 'Feel My Needs'.

All having played some of the biggest festivals across the world plus residencies in Ibiza. This is surely going to once again, be another huge night to go down in the books.

BIOS.
DJ W!LD’s rise to prominence has been no overnight phenomenon, more of a breakthrough from cult favourite of the Paris underground scene to globally recognized and feted artist and influencer. He boasts an abundance of accolades spanning his extensive career; from gigs in hallowed locations like Panorama Bar, fabric, Amnésia or events such as Circoloco and Cocoon, and releases including REKIDS offshoot Cabin Fever, One Records, Ricardo Villalobos and Luciano’s RAL series and 2020 Vision. His music blends techno, minimal, acid , house and hip –hop informed by an artist’s sensibility and an instinct for the cool and erotic in fashion, style and music. He’s also founder and label head of two very unique imprints; The W Label ensures his work stays true to his aesthetic, whilst his new DAILYCID imprint seeks and supports new talent. DJ W!LD has a rare skill of evolving as an artist (both as a performer and a producer), meaning he has kept up with trends and remained relevant, whilst never compromising his art.

Already a fan of hip hop and jazz, and a collector of vinyl records from age thirteen, W!LD took his DJ moniker from early hip hop cult film, Wild Style. He discovered house and techno at Club L’An-Fer in his home town Dijon, where Laurent Garnier was resident DJ and an inspiration to this quick-to-learn seventeen year old. Six months in Barcelona allowed him his first gigs, at KU club, and he secured his first residency on moving to Paris, at the Palace, the biggest club in the city, alongside gigs at Rex Club and Le Queen. One of his vinyl-hunting trips to NYC brought him a chance to meet with producer Peter Rauhofer, resulting in his first track which sold 50K copies, and playing at the most famous NY club of the moment “ TWILO”. It’s been onwards and upwards from there, to founding his own labels as well as increasingly prestigious gigs , residencies ( Fuse , Le Cirque ,Circoloco…) and lauded records.

His W Label, known for its epic W!LD original cuts and high level remixers including Kerri Chandler and Chez Damier or Andres, began in 2005 and was home to his first and subsequent albums; but as a very productive producer, the French maestro has released on many other prestigious labels such as One Records, 2020 Vision, Crosstown’s offshoot imprint Rebellion, RAL, Robsoul, REKIDS’ sub label Cabin Fever and more. W!LD is a chameleonic character who delivers a unique sound, always staying true to himself and his roots.

More recently, he founded his DAILYCID vinyl-only imprint which unearths and supports new artists, exploring different sub-genres of underground electronic music. After the label had its own wildly successful stage at SXM festival, DAILYCID parties also began, occupying secret basements in affluent London suburbs, or tucked away streets in Amsterdam, Berlin or Switzerland. This year will see the parties grow internationally.

Long interested in contemporary art and fashion, W!LD has soundtracked catwalk shows for Paris Fashion Week, including for Vivienne Westwood, Thierry Mugler and Christian Lacroix. These days he is working on his painting, with a view to creating more multimedia events blending lights, music, and his art. We can expect to see ever-changing, ever risk-taking, new work from DJ W!LD as his roster of clubs and festivals continues to grow, and his labels find and launch new talent.


Franky Rizardo:
DJ, producer, label boss. The young artist continues to prove himself as one of Holland’s finest exports in dance music, demonstrating a solid production career with releases spanning a collection of top labels, including a long term relationship with Defected Records, whilst continuing to push himself as a DJ with a distinctive style that works across the big stages as well as packed out clubs.

Establishing a brand is no easy feat, yet Franky’s FLOW concept continues to develop into a recognizable icon in the house music landscape. From humble beginnings as a weekly radio show on Holland’s national SLAM!FM, to international club nights and the hosting and curation of stages at the Netherlands’ hottest festivals, his work ethic knows no bounds. 2015 saw the start of his very own LTF Records - a platform intended to release his own works, alongside supporting emerging artists from Holland’s underground house scene. The label has already hosted a string of quality releases since it’s inception and continues to push the FLOW sound throughout 2016.

Not one to shy away from the studio, Franky has continued to develop his trademark sound, with his hard work already paying off this year as successful releases on both Defected Records and Simma Black, following up with a single on Defected later this year and well as originals on Nic Fanciulli’s seminal Saved Records and his very own LTF Records, whilst executing an array of quality remixes, including one for house legend Roger Sanchez.

There are no signs of stopping the Dutch-man, with a gig diary nearly hitting triple digits this year his versatility and refreshing sound has toured him across the planet. His commitment and passion to the music he plays has amounted to a packed out summer diary, which sees him play across Europe at the likes of We Are FSTVL, Defected Croatia, Tomorrowland, and Mysteryland as well as returning to Ibiza to play a summer long residency at Sankeys’ Redlight parties.

It is this determination and respect for his craft that has propelled Franky to steadily become one of house music’s most dynamic individuals.