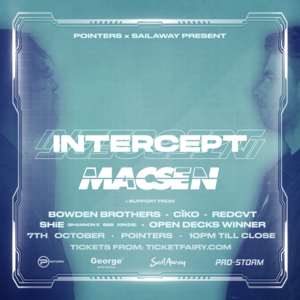 Intercept:
First foraying into DJing in 2009, Intercept has been steadily honing his craft as a producer. With his household bangers such as his calibrate remix and black lotus, Intercept is proving to be sure-fire hits on New Zealand’s thriving club circuit. With an official remix for Teddy Killerz and support from UKF and Noisia already under his belt, he’s fast proving himself to be a rising star, with his signature fusion of techstep intricacies and neuro bassweight making him a force to be reckoned with.

Macsen:
Macsen is an up-and-comingmulti-genre DJ producer from Auckland, New Zealand. Macsen(real name Beau Thoresen) has started to make some noise over the last few years with hisunique production winning him the Louis TheChild “Don’t Mind” remix contest and his track“Unstoppable Summer: A COVID-19 PSA” becoming a viral hit in New Zealand, playing atfestivals and gigs all over the country. Although a new name to the production scene,Macsen has been DJing for over 10 years entertaining crowdsat all sorts of venues, includingNew Zealand’s biggest festivals Rhythm and Vines and Ohakune Mardi Gras. Macsen brings awealth of EDM knowledge to his production, resulting in him experimenting and releasing allsorts of genres including trap, future bass, house, drum and bass and UK garage. Macsen’sarray of remixes have featured on New Zealands top EDM radio station, George FM andAustralia’s own Triple J. Macsen is gaining momentum as he crafts his production and DJskills and no doubt you will be hearing from him plenty in the future.