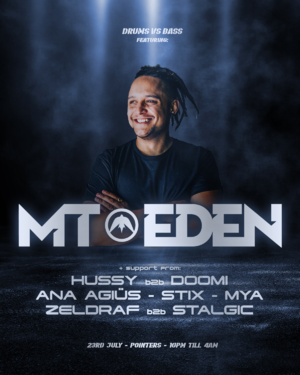 Dubstep pioneer Mt Eden is fronted by Jesse Cooper, who began releasing his music from his bedroom as a teenager before the term “bedroom producer” became a household term. The act quickly became an international sensation with his smash hit, Sierra Leone. Named after his hometown, Mt Eden is one of New Zealand’s most beloved entertainment exports.

During a music career spanning more than 10 years, he has sold out tours and has taken stage at the biggest festivals worldwide including marquis U.S. events Coachella, Electric Daisy Carnival (EDC), and Electric Forest. With his signature style of extended build ups, drum solos, double and triple drops, Jesse keeps his audience hooked as he delivers polished performances and innovative singles. After taking a pause to refocus, Mt Eden returns with a reinvigorated spirit and a ton of new music. Jesse has been collaborating with some major artists, with collaborations and solo tracks slated for the next several months. After taking Mt Eden solo, Jesse has teamed up with Ultra Records for his next few singles. He is ready to push out new music and compelling video content as he enters this exciting next chapter.