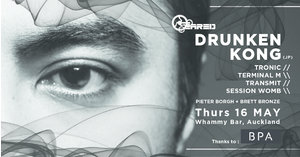 GEARED is just beginning to take off. And after the last show, that packed out beyond all expectations ... we are ready to keep this little engine chuggin!
Half the reason GEARED is in existence is to push for the harder styles of Techno and the other half is to have a platform to host international artists that fit our energy. And as we are getting our promoter cherry popped we wanted to get someone in that represents our style and vibe. And SO... without further ado, I introduce to you...

We've have been hunting down the monster that is DRUNKEN KONG for ages and have finally been given the privilege of hosting Dee at our humble event. This very steadily growing artist is making big waves across the globe!
I personally have been playing their music for years and their tunes have been secret weapons more than once. I am so SO proud to be able to bring him to NZ!
DJ Kyoko is home bound... this time... but she is most definitely with us in spirit and in music... and perhaps... if we treat Dee well... they may return to us as a duo in the future. ;) x

DRUNKEN KONG is the project of Dee and DJ Kyoko. In 2010, the two started their project when one day, they suddenly decided to make a track together. They have been releasing music on major international labels such as Christian Smith`s Tronic Music, Monika Kruse`s Terminal M Records, Transmit Recordings, loose records, !Organism, and D-Unity's Unity Records. All 7 tracks of their newest EPs on Tronic and Terminal M have entered Beatport Top 100 Techno chart at the same time, which has made an impact on the Asian and global techno scene.

The duo has also been active with domestic labels such as Session Womb and Plus Records & Agency.

Their music is gaining a lot of attention/support from international top artists and DJs such as Adam Beyer, Christian Smith, Monika Kruse, Pan-Pot, UMEK, BORIS, 2000 and One, Uto Karem, Karotte, Filterheadz, DOSEM, Stephan Hinz, Wehbba, Wally Lopez and deadmau5 just to name a few. Beginning of 2017 finds them working on their new studio album that is due out on Tronic around summer.

Their DJ mixes have also been featured on well-known podcasts such as Tronic Radio Show, Alleanza Radio Show and many more.
DRUNKEN KONG has been constantly active in the Tokyo techno scene, playing regularly at major Tokyo clubs such as WOMB, Ageha, Unit, Vent and Sankeys TYO. The two have also started their own resident party “INTENTION” at WOMB, inviting artists such as Christian Smith, Uto Karem, Nathan Barato, Arjun Vagale and Jewel Kid to Tokyo while also expanding their musical influence to other regions of Asia.

DRUNKEN KONG has also successfully toured around Europe in the summer of 2015, playing in different cities of Portugal, Spain and France, attracting new fans with their unique sound and groove. In 2016, they have also played at the legendary club Barraca in Valencia, and also for the Tronic vs. Terminal M showcase which was held during ADE (Amsterdam Dance Event) with many more worldwide tours coming ahead. With their powerful DJ style and charisma, the two are able to constantly amuse the audience and keep the dance floor going while expanding their ideas and skills to the next level.

There will be VERY limited doors sales and more on the door.
The last show was at absolute capacity...
We will be limiting numbers this time to make sure its comfortable.

Being a Thursday night we will be starting earlier and finishing earlier... so just get in there!

See you there and thank you for all your support! X