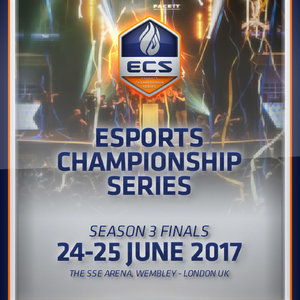 It's time to book your tickets for the largest CS:GO event of the year! Two action packed days of Counter-Strike with the best teams in the world for your viewing pleasure, live at the SSE Arena in Wembley, London. Are you ready?

Along with all the action we have team signings, celebrity appearances, partner giveaways, team and ECS Swag plus exciting surprises!

Presented by FACEIT and broadcast on YouTube, The Esports Championship Series is a ground-breaking esports initiative designed with the goal to help esports grow beyond its current state, while respecting the core values of the esports ecosystem and the community. The league has been built by adapting concepts common in traditional sports systems, while leveraging the characteristics that are unique to this vertical. Some of these concepts include team co-ownership, protection of players and promotion of all parties involved to increase the value of a common product.