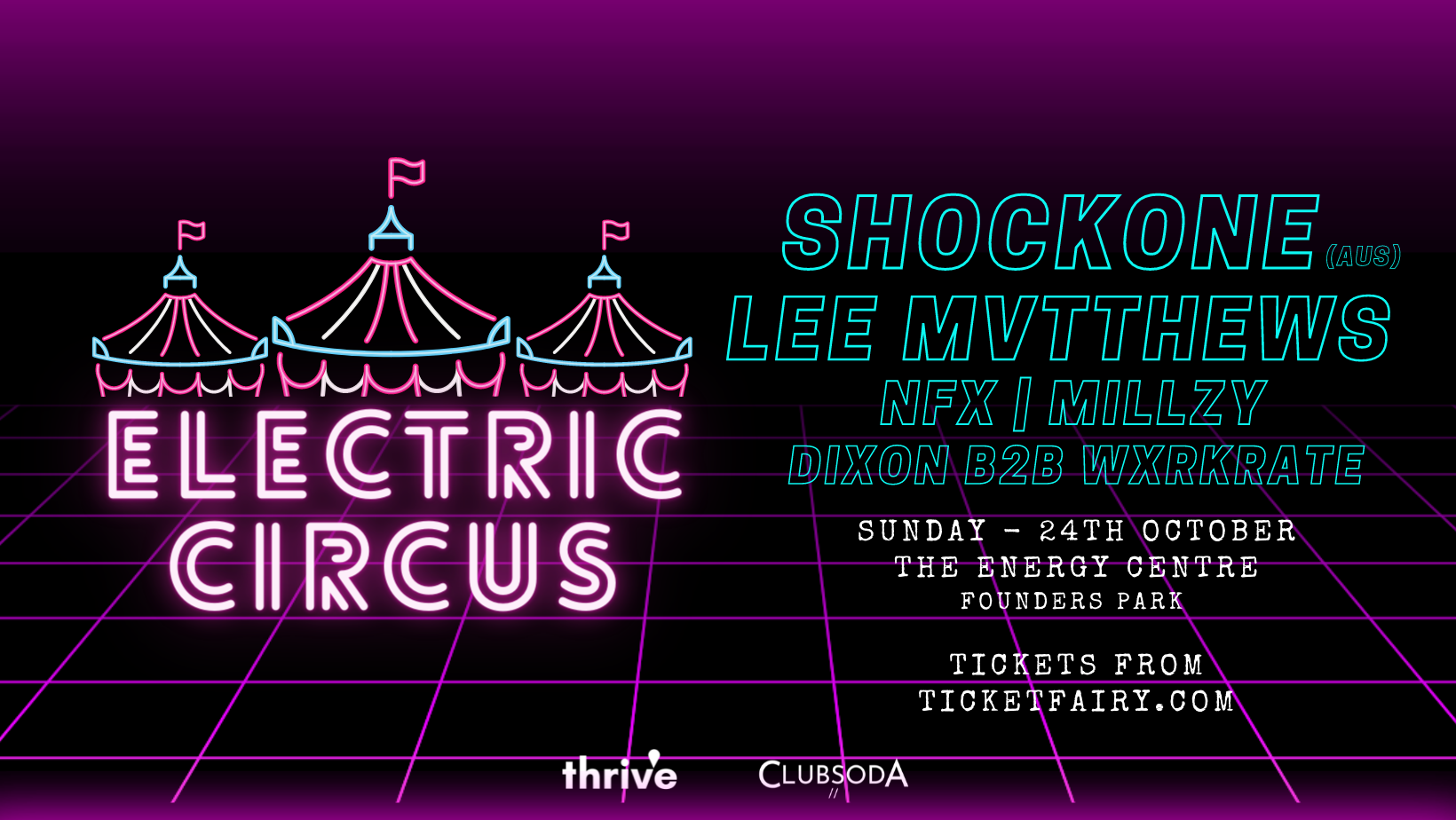 Roll up, roll up - The circus is in Nelson this Labour weekend! We're turning the Energy Centre into the big top for a night filled with Drum & Bass heavyweights.

Hailing from Perth, the epicentre of the Australasian drum and bass scene, ShockOne aka Karl Thomas is fast becoming one of bass music’s major talents.

Since the release of ‘The ShockOne EP’ in 2009, which featured the chart topping ‘Polygon’, ShockOne has been one of the hottest names in the scene. This was followed up by his highly anticipated ‘Re-Fix EP’, a collection of VIP’s and remixes of the massively successful ‘ShockOne EP’. The EP featured Phetsta’s dubstep remix of ‘True Believer’ which was featured in Pendulum’s 2010 Essential Mix on Radio 1, as well as the Dirtyphonics remix of ‘Polygon’ which was featured on Andy C’s ‘Nightlife 5’ mix, as well as hitting #1 on the BBC 1Xtra charts.

In mid-2011, ShockOne released ‘Crucify Me’, an epic drum & bass/dubstep anthem in which ShockOne also showed his versatility as a vocalist. The single which would serve as the first sneak peak at his forthcoming debut album, ‘Universus’. This was followed by the second single, ‘Relapse’, a dubstep track featuring Sam Nafie on vocals, as well as a blazing dance floor remix by Tantrum Desire.

Shockone relocated to London in 2012 to make his own mark in the spiritual home land of dance music, and what better way to do it than the genre bending, production epic that is ‘Chaos Theory,’ a cinematic journey featuring the voice over work of Corey Burton. The success this release received was nothing short of spectacular, holding the #2 on Beatport (only behind Skrillex/Nero collaboration), #1 on Trackitdown, and #1 on iTunes Dance in Australia, above the likes of Swedish House Mafia and Skrillex. The tune received high rotation airplay on Triple J radio Australia, was selected as Crissy Criss’ “Ace of Clubs” track on BBC 1Xtra, featured in Drumsound & Bassline Smith’s Radio 1 Essential Mix and received extensive DJ support from Knife Party, Nero, Chase & Status, Matrix & Futurebound, Sub Focus, xKore, Excision, Camo & Krooked, 501, Drumsound & Bassline Smith, Delta Heavy, DJ Hype, and many more.

The year of the apocalypse saw ShockOne tour extensively with two sellout solo tours of Australia, constant sold out shows throughout Europe as well as headlining slots at festivals such as Creamfields, The Big Day Out, Stereosonic, and Origin NYE in Perth.

2013 saw Shockone release his groundbreaking debut LP ‘Universus’ to critical acclaim. A sonic journey representing the lifespan of a universe, the scope of this semi-concept album was nothing if not ambitious. Released on Viper & One Love recordings, the album showcases the wide ranging musical expertise of ShockOne taking the listener on a multi-genre odyssey all the way from the big bang with ‘Singularity’ and ‘Chaos Theory’, right through to the collapse of ShockOne’s universe with the Vangelis-inspired modern day electronic symphony that is ‘Light Cycles’. Universus hit the number 1 spot on the Australian ARIA albums chart and the iTunes chart within its first week of release, solidifying Shockone’s reputation as Australia’s premier bass music producer.

Lee Mvtthews, aka, Graham Matthews and Tom Lee met in 2012 and started working together after discovering they had a nearly identical taste in music, eventuating in Lee Mvtthews in late 2013. Since then, they’ve gone from strength-to-strength, gaining a reputation for turning out infectious tunes that pair colourful melodies with bass-driven drops, garnering them plays from industry greats such as Andy C, Sub Focus, Netsky, Metrik, Grafix, Koven, Matrix & Futurebound, Dirtyphonics, K-Motionz, DC Breaks & Hybrid Minds.

They have become a favourite in the New Zealand festival circuit, playing regularly at the likes of Rhythm & Vines, Bay Dreams, Homegrown, Northern Bass, as well as headlining shows up and down the country. In addition to this, they have become a go-to support act for an array of international talents, including Netsky, Sigma, Kanine, Upgrade and more.

Lee Mvtthews released their debut EP ‘SILHOUETTES’ back in 2017, with the stand-out single ‘Nothing To Lose’ winning ‘Best Track’ at the George FM awards. Since then, Lee Mvtthews have become front runners at the country’s famous Georgie Awards, taking out the coveted ‘Best Track’ award for three years in a row, ‘Best Artist’ for two years in a row, as well as the ‘Best DJ’s’ at the most recent awards.

November 2019 marked the ultimate culmination of their incessant hard work and creativity with the release of their debut album, ‘Bones’. The lead single ‘Takeover (Ft. Nü)’ reached number one on the NZ Dance Charts, took out the top spot on George FM’s annual ‘Aotearoa Anthems’ countdown, and has garnered almost 2 million plays on Spotify.

They ended the year with a bang, embarking on a seven-date nationwide tour across the country to celebrate the release of their debut album, ‘Bones’, which closed out with a sold-out show at Auckland's Studio The Venue. Shortly following that their busy New Year’s season kicked off at the Rhythm & Alps warm-up party, before playing sold-out festivals around the country including Rhythm & Vines, Bay Dreams Nelson, and Farm Dance.

Earlier in 2020, Lee Mvtthews utilised the time off from touring to write a stack of new music which they are eager to start sharing with the world.

Their first single of 2020 was ‘Turning Back’, the debut release on ShockOne’s new label Dark Machine Records that marks the expansion to international horizons for Lee Mvtthews. ‘Turning Back’ is a drum and bass banger that has quickly gained international attention, including plays on Rene La Vice’s prestigious BBC Radio 1 Drum & Bass Show and Koven’s Rampage Festival set. This was followed up with ‘Discipline’, a collaboration with Australian duo Ekko & Sidetrack that was premiered by renowned bass label UKF.

Following that was ‘Don’t Say It’ featuring Christchurch-based vocalist PRINS, their third single of the year arriving via Dark Machine Records. ‘Don’t Say It’ is a euphoric vocal-driven single that quickly earned its spot as this Summer’s anthem.

Their last track of the year was club weapon ‘Reason’ in collaboration with Flowidus, and was released via Rene La Vice’s label DeVice Records. Two forces to be reckoned with whilst complimenting each other’s styles, Flowidus and Lee Mvtthews bring their all ‘Reason’. Boasting oscillating rumbles, triumphant synth riffs and gritty drums, this double duo team provided all the right ingredients for a relentless D&B banger.

Following their success sweeping up five spots in the George FM DNB Hundy with ‘Takeover (ft. Nü)’ coming in at number two, Lee Mvtthews were nominated for Best Electronic Artist in the country’s most prestigious music awards, the Aotearoa Music Awards in recognition of their monumental year. Up against some fine competition, come awards night the duo walked away with the Tui for Best Electronic Artist 2020.

2021 has already seen Lee Mvtthews take out the top spot in George FM’s Aotearoa Anthems Countdown ahead of playing around the country with DnB legend Wilkinson as his main support. Their latest release ‘In A Moment’ (ft. Watson) arrived via DeVice Records and is another melody driven heavy hitter that entered the Hot NZ Single Charts at #1.

Growing exponentially and with more new music ready to go for the latter half of 2021, it seems nothing can stop these two as they hold their spot as one of the hottest New Zealand drum & bass acts with international ventures on the horizon.