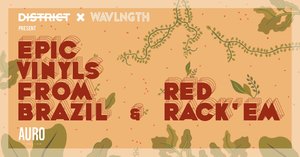 District India continues to inspire its audiences with line-ups from around the world with this latest instalment from Epic Vinyls from Brazil & Red Rack'em in collaboration with WAVLNGTH for the first time together.


About Epic Vinyls from Brazil:

EVFB DJs delivers a highly danceable trip of unique sounds from Brazil served on original and rare vinyl records. The deep digging DJ couple consists of a Danish DJ legend and radio host and a Brazilian singer and dancer deeply connected to her roots. Together their musical selection, skills and engaging DJ style have brought them to rock web radios and DJ sets all over Europe, the US and Brazil including re-occurring gigs at both Worldwide and Roskilde Festivals - two of Europe’s finest. Style: Expect percussion filled funky gems with that special “ginga” flavour. Selected sets: 1980s for Discogs and Mellotron Afro-Brazilian seven inch set.

Daniel Berman's musical life kickstarted with drumming in bands and spending his student loan on studio equipment with artists such as Jungle, Carl Craig and taste-making Nottingham club The Bomb being his major influences. In 2002, he began to self learn production with releases across labels such as Innervisions, Sonar Kollektiv and has also remixed artists such as Jazzanova Tensnake Jah Wobble Tini tempah on labels such as Universal Music Group, Domino and Parlophone.

In 2016, his self released track 'Wonky Bassline Disc Banger' suddenly transformed him from scene veteran to hot kid on the block supporting huge support from Moodymann, The Black Madonna and even Elton John becoming the biggest selling vinyl single of the year at Juno Records and being awarded record of the year at Phonica Records

In 2017, he dropped his album titled 'Self Portrait' with sell out shows at XOYO, Rainbow Warehouse, Digbeth, Birmingham, and Decks On the Beach in Beirut. The album picked up praise from many key players including long time supporter Gilles Peterson and Pete Tong who invited him onto Radio 1 to record an 'After Hours' on the same day the album was released.

With his taste making 'Smugglers Inn' show on Rinse FM and regular slots on Worldwide FM, Red Light Radio and NTS Radio Danny has never been afraid to roll his sleeves up and get dirty in the club and as the increasingly large audiences he now finds himself in front of can testify, this is an artist whose independent, real deal streak is being increasingly coveted.

This event is a safe space for all people. Please treat everyone around you with respect. There is a zero-tolerance policy for any kind of verbal or physical harassment or abuse.

Looking forward to a fun night, see you on the dance floor nice and early for some Brazilian boogie and house music.