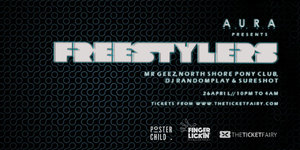 Got a promo code? Click here
Aura Pres:
The Freestylers

Its about time Auckland served up some interstellar broken beats, what better way than with some of the original front-men from the international breaks music movement, The Freestylers the masterminds behind club and radio classics "Get a Life", "Push Up", "Ruffneck" and many, many more.

The Freestylers are the dancefloor sensation of the new millennium, a fast moving, electro-rocking monster movie that is going to hit your house like a tidal wave, and wash all your preconceptions out of the door.

The Freestylers are the dancefloor sensation of the new millennium, a fast moving, electro-rocking monster movie that is going to hit your house like a tidal wave, and wash all your preconceptions out of the door.

When they play live, there’s up to twelve of them on the stage alone, guitars and a full rhythm section, DJ Jay-Rock, crowd pleasers MC Tenor Fly, MC Navigator and new vocalist Valerie M, a breathtaking whirl of sound and vision which leaves the audience as exhausted as the band. In fact, the dance is almost as important to the Freestylers as the music, and while break beats have been threatening to return to the dancefloor for years, the Freestylers are the first band to actually do something about it and were promptly proclaimed Best Band at the 1998 Muzik Magazine Awards.

On record, too, the Freestylers attack your feet first, as the world discovered when the band’s first album, We Rock Hard, hit the rocks. A blast of sheer sonic exuberance nailed to the phattest beats and rhythms around, "We Rock Hard" has already been proclaimed one of the dying century’s most dazzling, dizzying explosions, 13 songs and one long party and 500,000 sales later the band are about to drop their stunning new Album.

Freestylers producers Aston Harvey and Matt Cantor got together in 1993, through talking about the music they were into — electro, breakbeats, Afrika Bambaataa and the whole old school hip hop culture. But it wasn’t long before they took their obsessions into the studio, running off what would eventually become the Freestylers’ first U.K. single, "Drop The Boom" – initially released on the small Street Plastic label pre- Freskanova. Like Matt says, "we plunder samples like no man's business."

"We’re into really instant music," says Aston. "Too many dance artists are making jazz albums, because they feel it’s the mature thing to do." And the upshot of that is — "there are plenty of great home listening albums. But not enough proper party ones." And for the Freestylers, proper parties are what it's all about.

"A lot of the stuff the media will hype about, I don’t personally think rocks the dancefloor," Matt continues.


The Freestylers took off fast on the up and coming Freskanova label. The Uprock EP, and the FSUK2 remix compilation for the Ministry Of Sound have kept British dancefloors spinning; in America, "AK48," a retitled version of "Drop The Boom," became the hottest thing to hit the break circuit in years. By the time the Freestylers appeared on MTV’s PartyZone last summer, they had cut through the club scene’s traditional polarity like a cheesewire, and brought the world flooding to the Freestylers’ door. The boys took the UK summer festival scene by storm.

Grooverider, the Dub Pistols and Robbie Hardkiss have all turned in remixes for the US version of the UK chart topper "B-Boy Stance"; this was the first single on the US agenda. "Hip hop heads come to see us," Aston says, "clubby people, reggae people... it’s quite mad, really, two funky white boys bring all these people together. But people can see what we’re doing, and we're not selling out."

Not even a highly publicized brush with Oasis could stop them. When the Freestylers lifted a few bricks from "Wonderwall" for "B Boy Stance," Noel Gallagher was outraged enough to force the Freestylers back into the studio to re-record their masterpiece (look for the line about a certain "Mr Bad Man"), and that was enough to send "B Boy Stance" soaring up the British chart. And it was only when all the fuss had died down that anyone realized, it would probably have gone up there anyway.

We Rock Hard, the Freestylers’ rounds up all the band's British singles so far ("Ruffneck" and "Warning" followed "B Boy Stance"), but it throws a lot more than that into the mix. "We'll try any sort of styles to rock," says Matt — big beat, Ragga, hip hop, dancefloor, bionic skanking, anything — "as long as it's phat, we'll do it."

The Freestylers’ UK single (second American single), "Here We Go," investigates the same Ultramagnetic MCs song that Prodigy plundered for "Smack My Bitch Up" ("Give The Drummer Some"). Irresistible hip hop recorded with the masterly Definition Of Sound, Melody Maker called it "a full-on, relentless funky blast," but Aston prefers to point out that the band are Freestylers by nature as well as name.

"Feel The Panic" features a blistering sample from Public Enemy; while "Freestyle Noize" bags another. "We’re doing hip hop With Definition Of Sound, an electro track with the Soul Sonic Force, and a jump up ragga tune with MC Navigator. That’s why we’re called the Freestylers."

"If you listen to our album, there’s old school ideas, but with a new way of looking at them. The beats on our album are a lot phatter than they would have been 15 years ago. It’s the old school ideology, but with a new sound." The new Album combines the infectious raga and hip hop hooks with slammin beats and the
sound of ‘New Rave’.

"I read interviews with other people... and it sounds like they’re producing albums which have nothing to do with what they're really about. I can honestly say this is exactly what we’re about. The final criteria for our records is, can you go mad to them? Can anyone dance their fucking ass off to them? They can. They will." The Freestylers are taking the Freestyling ethic into the 21st century. The net is to be widened bringing more people into the fold.