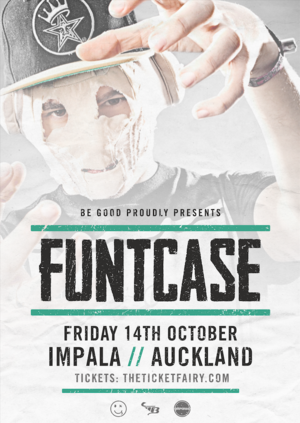 This is the biggest show we've put on to date.

With the help of some friends, Be Good are proud to present,

Producer and DJ from Bournemouth, UK, FuntCase aka James Hazell is known for his raw and dirty sound, forging the way with his controversial ‘filthy’ style. “FuntCase produces sensory overload bass music that wobbles, womps and machine guns through your body, making you dance whether you want to or not.”

James first expressed his love of music through jamming with his schoolmates, taking his energetic and aggressive drumming style from death metal as well as being heavily influenced by happy hardcore and jungle, growing up to a background of Helter Skelter and Dreamscape mixtapes.

After hearing ‘Bandwagon Blues’ by Twisted Individual, James fell in love with the drum and bass sound and began to focus his talents on producing. Sharing his tracks with D&B radio stations led to the first recognition of his foot-thumping talents, under the alias DJ Dose he released for the first time in 2007.

In 2009 James began to dabble with producing dubstep, giving his tunes a big energy by incorporating the drum and bass layering technique into his dubstep sound. His first track ‘Make Our Day’ was quickly signed to 4:20 Records. And so began the raw sound that is FuntCase.

It wasn’t long before FuntCase began trading tracks with Doctor P, and an offer soon followed to bring James into the Circus Records camp with the release of his famed track ‘So Vexed’, with ‘Mattress Punch’ on the flip, in 2010.

Since then the phenomenon has grown, FuntCase has become a legend of the DJ world. With an incredibly loyal fan base Funty is known world wide for working hard, playing hard, travelling hard – and DJing hard on stages globally. Claw 4 Life yo.