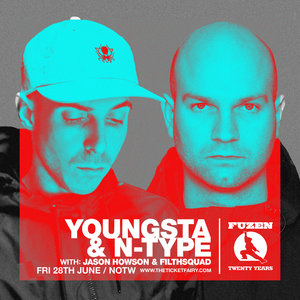 Come and celebrate Fuzen's 20th birthday with our 2-for-1 ticket deal! Grab this ticket offer now!

Hosting a variety of bass artists has always been a focus of Fuzen - so to celebrate that we are bringing Youngsta over for his first time with Fuzen, alongside returning N-Type and local heroes Filthsquad and Jason Howson.

The dubstep pioneer known as Youngsta, was raised in the 90s club scene of south London. First experimenting with jungle, he knew he found his calling the moment dubstep appeared in the south London scene. From techno to dubstep, he remains loyal to his signature sounds of the underground, while continuing to explore others.
N-Type has been a solid member of the UK dubstep scene since its infancy. With his background in jungle and garage, the British DJ and producer caught wind of the heavy South London sounds of dubstep in the early 2000s and dove right in.

With support from locals FilthSquad and Jason Howson, this is going to be a night of heavy rolling bass.

THIS EVENT IS R18