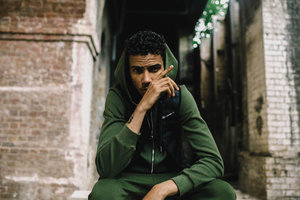 TICKETS ON SALE FRI 7TH JULY AT 10AM

AJ Tracey is the 23-year-old West London grime artist set to gatecrash the world stage in 2017. AJ’s addictive sound combines the razor sharp wit of UK street music with an array of international rap influences, and it’s already seen him appear on tracks with Denzel Curry, Rick Ross and A$AP Rocky. AJ picked up two MOBO nominations and a whole host of industry accolades in 2016, including selection as one to watch by MTV, Vevo and the BBC Sound Poll.

Hailed as the breakout grime star of the year after the release of his 2016 EP Lil Tracey, his first offering for 2017, a new track titled “LA4AWEEK”, has cemented his place on the throne. Produced by Nyge and AJ himself, the single marks the anticipated return of one of the UK’s most talked-about young artists.

Featuring Swoosh God (A$AP Mob) and Sloan Evans (Vlone), “LA4AWEEK” showcases the versatility that famously sets AJ apart from the majority of the UK scene – collaborating with his favourite US artists and growing a loyal army of supporters, not only in London’s grime heartlands, but all around the world. After a relentless 6 months of touring and recording in Europe and the USA, it looks like AJ might be gearing up to drop a new project - and this track sets the tone perfectly.