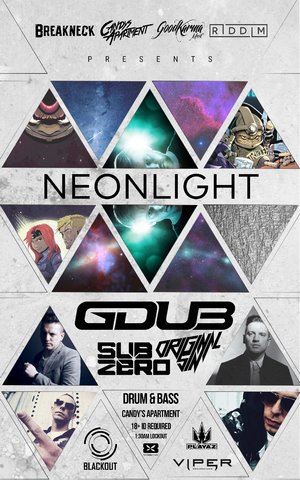 Breakneck Entertainment are teaming up with Perth based legends Riddim and Good Karma Music to bring Sydney an absolutely mammoth show, which will be testing the foundations at Candy’s Apartment November 4th. Solidifying the bond the East and West coast have once again, to deliver some all out audio madness!

We’re taking you on a musical journey, shooting through the stratosphere and into the galaxy, with the pumping sounds of dance floor smashing jump up heroes Generation Dub, and tear out neuro kings Neonlight hot on their new My Galactic Tale album tour.

You know the drill. It’s time to bring the noise to the Cross and bring the party to Candy’s with drum and bass all night long!

If you’ve listened to drum and bass over the last decade then you would with no doubt know the dance floor heaving, jump up producer duo - Generation Dub - comprising of Sub Zero and Original Sin.

These two gents forged a strong alliance at music college and tested their tunes at a series of nights they themselves ran under the banner Area 51. Catching the attention of a true don, DJ SS, they began pushing their sound on the hall of fame label Formation Records.

After many years of hard work, bangers and anthems, they also found the time to set up their own imprint, Propaganda, which they see as an outlet for their more experimental work under their G Dub moniker, and also a place for nurturing new artists, such as Adam’s brother Taxman. After parting company with Formation, DJ Hype approached them to join his True Playaz camp, which was an offer they could not refuse. They had separated as G-Dub, signed to Hype’s new label Real Playaz and gone their own ways to create two of the biggest Jump Up Drum and Bass producers, Original Sin and Sub Zero.

It has been along time in the making, and they’re ready to throw down together once again for this Australian audience.