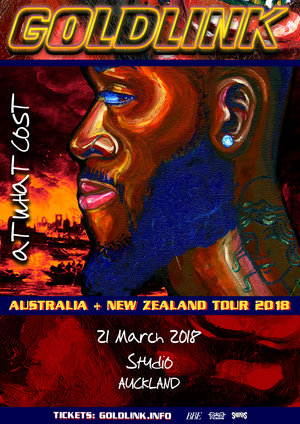 There is no one smoother than GoldLink! BBE, Fuzen and SNIFFERS are elated to announce that the alluring, multi-talented artist is coming down under for his ‘At What Cost’ album tour. GoldLink will be gracing the stage at Studio on March 21, 2018.

Helmed by the monstrous, platinum single ‘Crew’, his major label debut album, ‘At What Cost’ has propelled GoldLink to hip hop super stardom and his irresistible flow and infectious stage presence has seen him dominate sold out shows all around the world. GoldLink describes his sound as ‘future bounce’, a richly textured form of hip hop that bridges the gap between dance, soul and rap, a sound which is undeniably his own. Paired with his contagious energy and irrefutable charm, there is no question as to why he is becoming the hottest name in the hip-hop game.

With his legion of loyal New Zealand fans, this is set to be GoldLink’s biggest headline show to date, and to hear his fans singing along to every word of his monumental album on 21 March 2018 is going to be nothing short of magical.

GoldLink fans can access presale tickets by signing up to his newsletter via: smarturl.it/GoldLinkSignUp

Pre-sale tickets on sale 10am Friday 24 November via: goldlink.info/tour

General tickets on sale 10am Tuesday 28 November via: goldlink.info/tour