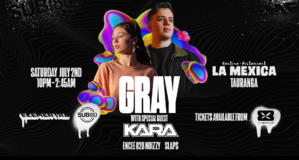 TopInfluencers
Elemental is proud to present Gray & Kara for their Tauranga stop of their NZ tour!
Featuring:
GRAY (UK)
London born producer Nick Gray’s rise to prominence within drum & bass is nothing short of astounding. The Bristol based artist has become a featured figure on line-ups across the UK, having cut his teeth on the underground circuit of unlicensed and free raves throughout the nation. Showcasing a fiercely up-front and dynamic production capability, his amalgamation of dubwise, tech and jump up styles fuse to form a truly deadly combination for any dance.
KARA (UK)
Coming from a musical background, it was always destined that Kara would be involved in music from a young age and her love of Jungle and Drum and Bass grew strong in those early days.
Becoming a DJ was the natural progression for Kara who was taught by her mother to play vinyl from the families large record collection and she soon found herself performing at parties which progressed into clubs and festivals.
And all star local support from:
Encee b2b Noizzy
Slaps
Saturday 2nd July
La Mexica
10pm to 2:45am
TopInfluencers