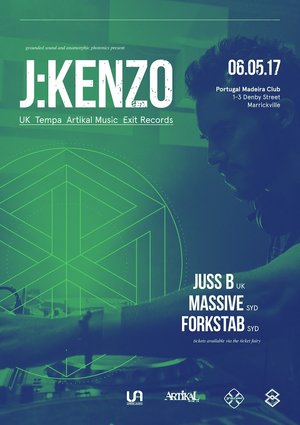 TopInfluencers
Grounded Sound brings you the bossmen J:KENZO and Juss B.

J:Kenzo is a veteran of the dubstep scene. The Kent-based producer began his adventure as the founder of Soul Shakerz, an imprint which he launched in the golden years the mid 2000s. Back then, he’d already acquired a specific Tempa-esque sound that would catch the attention of the DJ Youngsta — resulting in a relationship that’s to date produced eleven EPs/ singles and an album.

In 2012 he founded the Artikal Music UK record label, pushing his signature sound of dubstep and is one of the most respected in the realm of 140 BPM, as well as founding Lion Charge Records, pushing a distinctly dubwise tip.

More recently he has been experimenting with more BPMs and styles, with  releases on Cosmic Bridge, 31 Recordings, and Exit Records in 2016. His labels have also started pushing into more diverse areas, but still with his signature of quality. But he still pushing the 140 sound, with releases last year on ZamZam, and heavywieght release Battlefield on his own label Artikal Music.

Running a monthly show on Rinse FM for the past 4 years, he is consistently on the forefront and pushing underground bass music. This is a show not to be missed by one of the best in the business at the top of his game.
TopInfluencers