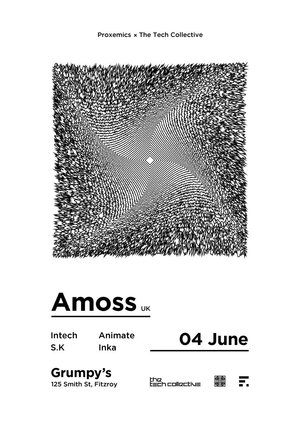 Amoss is the result of a passion for music and the lonely abandonment of the Herefordshire countryside. The duo first met at a High School party circa 2006 and consequently decided to begin a musical partnership after sharing a bottle of Cointreau and discussing their love for Slayer. After a few years of various bands and their discovery of electronic music, they delved into the realms of Drum and Bass, quickly developing a taste for techstep styles of Renegade Hardware and Moving Shadow. With a pair of belt-drive Numarks, copy of Ableton 5 and a few issues of Computer Music Magazine, Amoss was born.

As producers, Amoss have built a significant discography, releasing with some of the most forward thinking labels within Drum & Bass and receiving DJ support from the likes of Spectrasoul, Ant TC1, Doc Scott, Ulterior Motive, London Elektricity, BTK, Nymfo, DJ Storm, Loxy and many more.

As DJs, they focus on delivering a broad spectrum of sounds that has gained a solid reputation amongst the UK and Europe. Headlining the Meeting Points festival in the Czech Republic alongside Lynx &Kemo, playing at both the Moat and Dungeon stages at Outlook Festival 2011 & 2012 in support, as well as their own headline shows throughout Poland, Italy, Lithuania, Finland, Belgium, Portugal and Germany to name a few.

Taking pride in supporting the wealth of brilliant music their scene has to offer, the duo are constantly searching for music from new and upcoming producers offering variation where others opt for the tried and tested. Their efforts have not gone unrecognized; with massive support for their podcasts from Dispatch Recordings, Horizons Music, Renegade Hardware and The Bassic Agency.