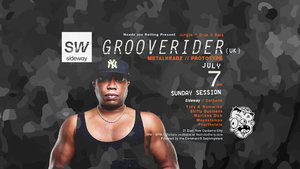 Considered to be one of the fathers of DNB you have to give it up for this legend!

Revered as one of the most iconic DJs to grace the underground and a double MOBO Award winner (amongst many other awards), Grooverider is revered as an essential tastemaker in dance music.

From his Rage residency with Fabio, to groundbreaking Metalheadz sets at Blue Note and a weekly Radio 1 show with Fabio for almost 15 years, he is one of the true originators of Drum & Bass.

His own productions are classics, incl. his Codename John 12" on Metalheadz and ’Mysteries of Funk LP’ on Sony, plus seminal remixes for Goldie, 808 State, Roni Size and Jonny L (the timeless Piper Rmx on XL).

Prototype Recordings, his label, has also been a major inspiration for over 20 years, with pivotal output from Ed Rush, Dillinja, Matrix, Optical, Bad Company, Photek and more.
Following its recent revival, releases from Drumsound & Bassline Smith, DJ Limited and Stompz have reasserted the label's prowess and it remains as relevant as ever.

With plenty of new releases and a monthly Rinse FM show with Fabio, Grooverider remains at the forefront of the scene today.

Catch ya in the dance!