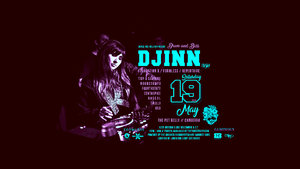 Headz are Rolling are back at it in 2018 with another quality international booking. Expect top shelf Drum and Bass well into the early hours at our new spot The Pot Belly in Belconnen.

Having already contributed tracks to a number of well-received multi-artist releases, 2017 saw Djinn make her true mark in production with debut ‘Dark Reference’ EP released on Foundation X overtaking some of the scene‘s most prolific producers to hold down both weekly and monthly number one best-selling vinyl spots online.