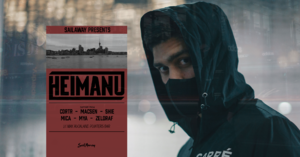 Heimanu first came to prominence as a Sydney based producer with his official remix for RL Grime’s “UCLA”. Keeping up the momentum, Heimanu has since released on labels such as Sable Valley, DIM MAK, Lowly, NIGHT MODE and Circus Records totalling 5M+ streams across all streaming platforms. He now has over 120k+ monthly Spotify listeners.

Heimanu first received praise in the underground scene after his ‘NOVA Tribute’, which involved re-sampling all the songs from RL Grime’s NOVA album into one. He followed up with this tribute series with a ‘NOVA Remixes Tribute’ and a ‘Hi This is Flume Tribute’.

He is now known for his unique sound which he encapsulates under the genre ‘NuRave’, which displays euphorically energetic builds, powerfully melodic drops, and lulling atmospheric breakdowns. He couples rave sounds with crunchy basses designed to give his emotional writing a darker edge. Matching these sounds with a futuristic and dystopian aesthetic, Heimanu wants to be your guide into the future unknown.