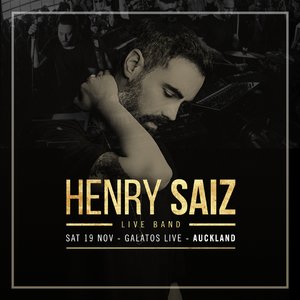 Join us to be a part of something amazingly unique, as Henry Saiz and his live band stop in as part of their Australasian tour for a one off exclusive show in Auckland city.

This is not just any ordinary tour, oh no - this is to curate an entire new album, by recording sounds that are unique & inspirational from amazing places all around the world, and then taking these sounds back to the studio to turn them into tracks.

This entire process will be filmed and released with the album as a documentary/film. It seems quite fitting really that Auckland,New Zealand is of course on this carefully selected list of cities on the tour.

The Madrid-native Dj& producer soon attracted the attention of UK giants such as Renaissance, Global Underground and Bedrock, his own label NaturaSonoris won 'Best Label' of 2011 by Deejay Magazine and his standout remix of Guy J's 'Lamur' brought him his first "Essential New Tune" from Radio 1's Pete Tong.

He was also chosen to follow in the path of dance music elite when invited to mix his own CD compilation for the prestigious Balance series (also in 2011) , a process in which he utilised vinyl, cassette, reel-to-reel tapes and over 100 field recordings that he'd recorded as a pre-teen – many still regard the mix to be the finest the label has released so far. Following on from the likes of James Holden, JorisVoorn, Will Saul or Agoria, Henrys addition to this world-renowned mix series has more than lived up to expectations and has set a new benchmark in depth and quality.

In the last years, Henry´s impressive curriculum has led him to perform around the world, accumulating many big successes, including praise from critics and the public from festivals such as Sónar, Creamfields, Ultra Miami, Global Gathering and Benicassim among many others.

Simultaneously, Henry has created and hosted his very own on-line radio show "The Labyrinth" with a growing legion of listeners worldwide.

After a long list of succesful releases and non-stop touring worlwide, Henry releases in 2013 his debut LP, the suggestively titled 'Reality Is For Those Who Are Not Strong Enough To Confront Their Dreams'. The embodiment of 2-years of production and recording, the album features 17-tracks over an extended listen to immerse the listener in a journey through Henry's own interpretation of electronica – a listen that is likely to surprise both his existing fans and the new ones discovering him for the first time

Henry's first productions were released through the highly regarded Global Underground and Paradigm Musik imprints. These releases were instantly noticed by house giant John Digweed, which led to creating one of the biggest tracks of 2009, which was also named as Pete Tong’s Essential New Tune. Released on Bedrock, Henry's remix of Guy J’s “Lamur” was regarded by critics and DJ’s alike as “the track of the year”. Following the success of this remix, yet another giant label; Renaissance commissioned the release of “Artificial Paradises EP” and “Madre Noche EP” in 2009 and “The Rider EP” in 2010.

Not a man to be content with such success, Henry whilst producing some of the biggest tracks around has also simultaneously been developing his live show. Using a combination of Native software and hardware, an Akai APC-40, Access Virus TI and other equipment, Henry has complete control over his meticulously created and fully original edits, loops and tracks. The integration of these techniques into his highly acclaimed podcast “The Labyrinth” and both live and DJ environments has allowed Henry to show his true potential in building sets that strike a chord with audiences across the world. His rising reputation earned Henry the honour of being asked to mix Balance Music’s 019 compilation. Following on from the likes of Timo Maas, Joris Voorn, Will Saul and Agoria, Henrys addition to this world-renowned mix series has more than lived up to expectations and has set a new benchmark in depth and quality.

Whilst being a producer, DJ and live performer is paramount to Henry, another element close to his heart is finding and developing new talent. Henry started his own label, Natura Sonoris (Nature Of Sound) in 2008 and it has become a platform for not only his own productions but also for artists such as Damabiah, Cora Novoa, Sistema and Ryan Davis to name but a few. The focus of the label is to connect electronic music with art and life. This is reflected in all aspects of each release from the music itself down to the artwork, a formula that has been received extremely well and now has a big following worldwide. September 2012 sees the release of his new single - Henry Saiz ‘Our Discovery’, which has been garnering a huge following this summer on the white isle, with supporters including Lee Foss, Sasha, Audiofly, Blond:ISH and many others.

Henry’s long awaited artist album is now underway, entitled ‘Reality is for those who are not strong enough to confront their dreams’. Due for release in February 2013 on his own label Natura Sonoris, this ground-breaking concept album engages his fans in an exciting and never-before-done way, by asking them to send him recordings and samples that he will incorporate into tracks from his album. Everyone can be involved in the creative process; fans can use the custom built interface on http://www.wearehenrysaiz.com/ to send him their thoughts, noises, field recordings or any other sound that means something to them. Be a part of his album today by visiting the site on your computer or smart phone.

Henry has now taken his DJ and Live shows around the globe. He has also been a part of festivals such as Sónar and Creamfields amongst many others and continues to be one of the most popular up-and-coming Spanish artists of his generation, having recently won the categories of ‘Best Live Act, Best Label and Best Compilation’ in the prestigious 2012 DJ Mag Spain awards, and he also won the ‘Best of 2011’ award in DEEJAY Magazine. His constant growth has enabled him to spread his music to new audiences and is, without doubt, one of the bright new talents on the global electronic music scene.
And with that, sit back, press play and immerse yourself in the sound of Henry Saiz.
https://www.beatport.com/artist/henry-saiz/11309
https://soundcloud.com/henry-sai
https://www.facebook.com/HenrySaizOfficial
https://www.residentadvisor.net/dj/henrysaiz
Thanks to:
V Energy NZ
Audiology
Collude
Tigerstyle Agency
GalatosLive
TopInfluencers