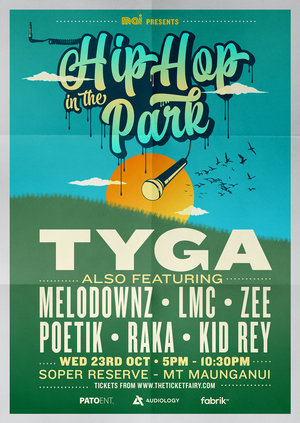 Tyga is a rapper, singer and songwriter from the US. His frequent chart-topping albums and singles have made him one of the most successful hip hop artists of his generation.

Tyga rose to prominence through releasing independent tracks and mixtapes, singing to Lil’ Wayne’s Young Money Entertainment in the late 2000s. His debut album, No Introduction, was released in 2008 to critical and commercial acclaim. Another mixtape, Fan of a Fan, followed in 2010. A collaboration with Chris Brown, Fan of a Fan also featured Lil’ Wayne and Bow Wow. The single ‘Deuces’, which was taken from the mixtape, reached number one on the Billboard Hot R&B/Hip-Hop Songs chart and was nominated for a Grammy.

Tyga’s next album Careless World: Rise of the Last King followed in 2011, spawning the hit singles ‘Rack City’ and ‘Far Away’. In 2013, Tyga released the album Hotel California, which featured an all star roster of guests including Lil Wayne, Rick Ross, 2 Chainz, Game, Future and Jadakiss. Tyga went from strength to strength in the following three years, releasing two more albums and appearing on his own TV show.

2018 arguably saw Tyga’s biggest ever chart success, with the single ‘Taste’ featuring Migos’ Offset reaching number 9 on the Billboard Hot 100 and number 10 in the UK, making it his fifth top 10 UK single.