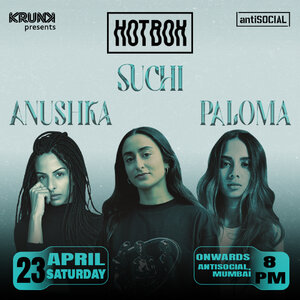 Suchi: She hosts a monthly show on Boxout FM called 'Through The Smog' and is part of the South Asian collective, Daytimers

As a DJ, her selections combine the right touch of percussive drums, Indian disco, 90s prog house, UK breaks, trance, electro, and techno. A genre-blending approach that comes from her close links to local producers based in all three of her hometowns. Her mission to place South Asian producers on the map is prominent throughout her sets and mixes, including her Boiler Room debut alongside Daytimers.

Anushka: Her career as a DJ began with the inception of the duo, Anushka + Agent, along with Smita Singh. Her sets go beyond Breaks and Drum and Bass and seep into genres like Electro, Leftfield House and Techno. Anushka’s DJ sets layer bass-heavy and edgy breaks ultimately ensconced in a darker, moody veneer. She embraces a variety of styles in her sets and has become an icon of edginess- creating music interwoven with keen fashion sense, that is fresh, authentic, and driven by dance.

Paloma: Paloma Monnappa is a colourful operator of a myriad of sounds, and storyteller whose DJ sets are a vivid transaltion of her life's experiences. Her Djing has taken across india from urban clubs to outdoor festivals and to the sunny shores of Sri Lanka. Worldly in her outlook, eclectic in her range, and isnpired by sould, choice of music amis at moving people.