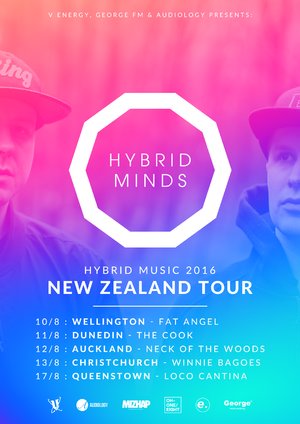 Wellington/Dunedin >> Free before 10pm, $5 after (Oh One Eight club night)

Comprising of Josh White & Matt Lowe, Hybrid Minds represent a musical force, with their melodic, soulful Drum and Bass . A synergy between influences including trip-hip, acoustic, soul and jazz, Hybrid Minds draw on a myriad of influences to produce the smooth sound they are known for.

Matt & Josh had worked with one another for years running record labels before deciding to put their drive into music making instead. After only a few joint efforts, the duo immediately shot to the forefront of the Liquid scene, with household names supporting the tracks from the newly formed duo. Their method of bouncing ideas off each other in the studio yielded immediate results with one of their first tracks, ‘The Place’ becoming one of the biggest liquid tracks of 2011, receiving vast amounts of love from fans globally. Combining hard drums, delicate vocals and enchanting melodies, ‘The Place’ features all the elements that now make upHybrid Minds’ distinctive, soulful sound.

Hybrid Minds are now set to solidify their rapidly growing reputation in the scene, and become one of liquid’s new supergroups.