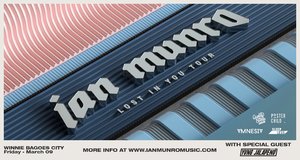 
The impossibly talented Ian Munro has been rising quickly as both a producer and DJ since he first emerged on to the bass scene. Hailing from New Zealand, the young Munro’s style soon caught the eye of trap titan UZ, who welcomed him onto his Quality Goods Records platform.

With an exciting and diverse sound, he has gathered ongoing support from the likes of Skrillex, Hardwell, Snails, Party Favor and Alison Wonderland – and they continue to play out his music regularly. High profile press outlets such as Dancing Astronaut, Run The Trap and Nest HQ keep the hype around Ian Munro fizzing, featuring each release that drops.

The buzz began to take hold in October 2016, with the release of his debut EP ‘Stay Lit’ for UZ’s Quality Goods Records; the title track soon appeared in the Top 50 US Spotify Viral Chart. The start of 2017 saw an unofficial remix of Skrillex’s ‘Purple Lamborghini’ go viral, and Munro’s signature use of powerful drops became a staple in his work.

Summer 2017 was a thrilling period, including a release on Dim Mak Records and an official remix of seminal dubstep anthem ‘Sierra Leone’ from Mt. Eden through Ultra Music; with it flying to the Number 1 spot on Hype Machine in the week it was released.

In August, Quality Goods released a new single from him, this time a spicy collaboration with Yvng Jalapeño for ‘I Don’t Need You’ ft. Cultra. Given Australian radio support, the track also featured as one of the ‘Best New Tracks Of The Week’ on Beatport’s Trap and Future Bass chart.

Ian Munro has rounded off a seriously successful year with a reworking of UZ’s ‘Bad Gurlz’ ft. OG Maco, which featured on the official ‘Layers’ remix LP in November. Heading into 2018, as ever, his sound will keep on pushing through genre restraints and highlighting his inimitable creativity. Get ready for more as the next twelve months unfold…