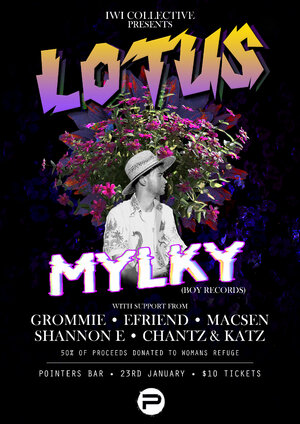 ‘IWI Presents:’ is back and we are taking over Pointers again for a night of good people, good vibes and good music. This time round we have local legend ‘Mylky’ on headline duties. Mylky has been smashing the scene lately and has just come off a run of shows at RNV, Bay Dreams and STATIC and has consistently been dropping heat on Soundcloud & Spotify, He's definitely someone you want to see live as soon as possible.

In true IWI fashion, we have nothing but the freshest support artists and insane visuals to accompany.

If you like experimental D&B, Trap & Bass music on one of the nicest sound systems in Auckland then be sure to come through and support your local artists.

Mylky has been turning heads locally and abroad with his insane, forward thinking production and has had support from some of the biggest names in the game. His sets are both energetic, emotional and sometimes he’s known to fool you with a good old fashioned ‘meme’ edit so expect nothing short of a good time.

With a pocket full of original releases and remixes, Macsen will be bringing some serious kiwi heat to the lineup. His music graced the main stages of festivals in NZ all summer long in the form of a collab about COVID-19 with the great Ashley Bloomfield. Primarily a future bass and trap specialist, Macsen isn’t scared to switch things up and explore other genres in his mixes. Expect the unexpected and prepare for a roller coaster of a set!

With a passion for music and fresh on the scene, Arlen Jade AKA Grommie comes kicking out of Te-Awamutu ready and willing to lay down big beats anywhere, anytime. For her its all about the journey and the groove. No matter what genre or mood, she will sure have you dancing. Her passion stems from deep within and she’s always ready, the question is, are you?

Ethan De Roxburgh AKA EFRIEND is new to the scene but definitely not new to smashing buttons and turning knobs. In the past year he has made quite a name for himself playing a bunch of gigs in town and more recently sets on George FM, this man is rising fast.

Pixie Lanes love for music makes her an exceptional DJ who’s skill set is one which evolves by the minute. A true artist and performer who engages and locks in her audience which is a credit to her unlimited range. Pixie started her journey as a local Auckland DJ playing the local circuit and turning heads as she steadily gained respect and took use of her best trait, her ability to keep absorbing and learning from her close peers she admires. A true lover of music and forever an apprentice to the realm of music. Pixie Lane.

Shannon E is a 21 year old Drum & Bass/Dubstep DJ from Auckland. She is known for her high energy, heavier style sets and will no doubt be bringing the heat. She has been on supporting duties for some DNB heavy weights such as Phibes, Flowidus and Kaz. Make sure you stick around and catch her throwing down a filthy set to close the night.