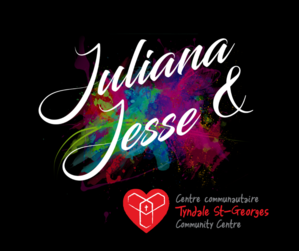 Since performing as contestants on the Canadian talent show La Voix (The Voice) in 2016, brother-sister duo Juliana & Jesse have been featured and interviewed on numerous radio stations, including CHOM 97.7 FM and CJAD 800AM. In their first 3 years, the duo has played over 400 shows in Quebec, Ontario and abroad. In the fall of 2017, they performed at the MUZ showcase in Montreal, winning 3 people’s choice awards. In 2018, they completed their first international tour in Italy. Their first 2 singles, “Railway” and “Getaway” received radioplay in Quebec, Ontario and the Maritimes, and their first single in French, “Couleurs de l’automne” reached the Top 10 on SiriusXM Franco. The duo is currently preparing to record a new EP at Planet Studios in Montreal in early 2019, set for release later on in the year.

*** All proceeds from the concert will go to Tyndale St-Georges Community Centre in Little Burgundy. ***