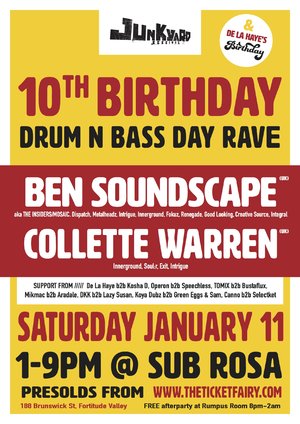 So, Junkyard Sessions has been throwing parties for a decade - can you freakin' believe it?! To mark the occasion (as well as De La Haye's Birthday too!), we're gonna celebrate with all of you that have supported us, helping to make it possible. For every year we've been having fun together, there's an hour of tasty bassy bizness, across 2 venues. Starting on the VOID system at Sub Rosa 1-9, then heading to our home, for a FREE after party Rumpus Room 8-2.

To make an already amazing situation even better, Ben Soundscape (The Insiders/Mosaic) and Collette Warren will be joining us at Sub Rosa to delight our senses. Always two of our fave acts at Sun and Bass Festival (Italy) so we feel extremely fortunate to have them add an exclamation mark on our BDay celebrations, as their vibe truly epitomises what Junkyard is about - depth and FUN! Read more about them below...

The Junkyard crew, De La Haye & Kosha D, will be joined by a collection of Brisbane's finest selectors B2B, ensuring that the day is EPIC from start till done. We will be releasing the names of these fine purveyors of bass, leading up to the day.

BEN SOUNDSCAPE - UK (aka THE INSIDERS/MOSAIC)

Ben Soundscape started producing his first beats at 17. It was around that time he started listening to Fabio & Grooverider’s seminal Radio 1 show, and got the bug straight away.

Danny C was the first to notice him, signing Ben for the debut release on Blue Box back in 2002, under his first alias 'First Light'. Soon after, Ben formed a duo with friend Joe Wills called The Insiders. Together they would draw influences from everything from soul, funk and jazz to house, techno and film soundtracks, and go on to release material on some of the greatest labels in the scene. Ben has produced tracks for Creative Source, Renegade Recordings, Metalheadz, 31 Records, Frontline, Defunked, Breakbeat Science, Nu Directions, Good Looking Records (as Catch 22) and Blue Box.

Ben started his own club night, Intrigue, back in 2003 at an intimate venue in Bristol. His vision was inspired by the
Swerve nights in London – quality, forward-thinking music in a small club. A great atmosphere, solid sound system and open-minded crowd were important qualities he had to build for years. Fast forward to the present, and Intrigue has become a firmly established and highly successful fixture on the drum & bass calendar.

The next step for Ben was to start his own label, Intrigue Music, which was formed in 2009 as an outlet for the deeper side of
drum & bass. With the quality of music the label continues to release, it’s no wonder Intrigue Music attracts major attention
and support from both DJs, heads and the press alike.

Ben continues to refine his own style as Ben Soundscape while also regularly working with fellow collaborators RoyGreen & Protone, Randall, Bachelors of Science and SMP. He is also part of new outfit Mosaic.

Collette Warren is a singer/songwriter born and raised in Birmingham, with influences from Motown, jazz, reggae and soul, funk, 90′s R&B and disco. She has been singing from a very young age, thanks to growing up in a musical family.

In 2007 she moved to London to follow her long - held dream of becoming an artist, and was quickly noticed by MC Tali, who asked her to join her live jazz band as a backing singer. This was an amazing experience, giving her the confidence she needed and allowing her the opportunity to play such legendary venues as Ronnie Scott’s and the Jazz Café. She continued working closely with Tali until 2011, performing at Sun & Bass and a major festival in New Zealand. Since then, she has now made a respected name for herself as a solo artist in the drum & bass scene, performing all over the world and having written
and recorded for many of the drum & bass scene’s leading producers.

Artists she has worked with so far include DJ Marky, Calibre, Skeptical, FD, Emperor & Riya, Quadrant, Iris & Kidhops, Ink, The Insiders, Ben Soundscape, Break, Utah Jazz, Random Movement, Klute, Philth, Facing Jinx, Mr Joseph, L-Side, Bachelors of Science & Lurch. And has had releases on labels such as Soul:r, Exit Records, Innerground, Commercial Suicide, V Recordings, Spearhead, CIA, Deepkut, Intrigue and many more.. One of her most recognizable tracks is the massive ‘Desire’ with Skeptical, which was released on Soul:R in 2014. And in November 2018 she released her first solo EP ‘Hidden Lines’ on Innerground records which reached number 5 in the Beatport charts.

In more recent times, now residing in Bristol, she has put together a 6 piece live drum & bass band featuring some of drum & bass’s newest talents, Lurch, Ben Soundscape & Octopi. Together they have transformed Collette's drum & bass songs into full on live versions and have also collaborated on writing brand new music together! Expect Funk, Soul, Jazz and of course Drum & Bass! But also pure vibes & energy!