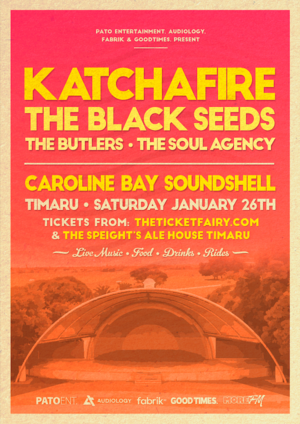 Timaru’s iconic Soundshell in Caroline Bay will host two of the most well-known bands in New Zealand in a one-day entertainment extravaganza this January.

Katchafire and The Black Seeds will headline the all-ages event at the Soundshell on Saturday, January 26, 2019. They’ll be joined by The Butlers.

Presented by More FM, and with a collective of the country’s leading promoters behind the day - Pato Entertainment, Audiology, Fabrik NZ and Good Times - this will be the first big ticketed event held at the famed Soundshell in more than 15 years.

The promoters have an impressive track record of putting on some of the best entertainment events in the southern hemisphere, including Bay Dreams (The Mount and the new sister festival in Nelson), Soundsplash and One Love. They’ve also brought many international touring acts to New Zealand, including Bryan Adams. And this January, they’re looking forward to bringing the magic to Timaru, with South Islanders guaranteed a fun-filled, vibrant mini-festival vibe with great music; great food and drink; and amusement rides.

The Soundshell at Caroline Bay is an integral part of the Timaru community and many will hold fond memories of the venue, which has hosted many popular local and international acts over the years, including Val Elliot & The Rhythm Ramblers in the late 60s; Jimmy Barnes, Ice House, Dave Dobbyn, The Jordan Luck Band and The Exponents.

Now two of the greatest live acts in Kiwi music, Katchafire and The Black Seeds, will join the list of legends who have performed at the Soundshell.

Famed the world round for their distinctive roots, reggae sound, Katchafire are one of New Zealand’s most successful musical exports. In July this year the band released their fifth album LEGACY, which shot straight to the top of the New Zealand Album Chart and the USA iTunes Reggae Chart. LEGACY continued its winning streak impacting mainstream charts around the world, from Poland to Australia; Ethiopia to Palestine; Bangladesh to Cameroon - making Katchafire a global phenomenon.

Katchafire has countless award-winning, chart-topping albums to their name and are without question one of the most exciting live acts around.

The same can be said of The Black Seeds who have become ingrained in the fabric of New Zealand’s touring scene. They’ve also remained at the forefront of the country’s internationally renowned live music movement. Led by Barnaby Weir, the band’s sound is steeped in the island grooves that inspired the birth of the band in 1998; but it’s also blended with funk, soul, Afrobeat and other eclectic elements over dub/reggae.

The Butlers will also join in the fun. Although only new to the scene, the up-and-comers from Sumner in Christchurch have been whipping up hype with their unique Kiwi sound, which fuses jazz, reggae/dub, soul/funk and rock. Late last year, The Butlers got the call up to perform at Rhythm and Vines - their first major festival - and since then it’s all been go, with the five-piece releasing new music and performing sold out shows across the country.

Katchafire, The Black Seeds and The Butlers are bands not to be missed at the best of the times. But performing back-to-back and at such an iconic venue in beautiful Caroline Bay, this promises to be a day that’ll have punters reminiscing for years to come.