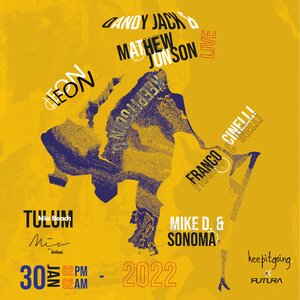 One of the best beach club in tulum is waiting for you to live the most fantastic experience in the beautiful beaches of the Caribbean under the moon with the best DJ’s from all over the world. Join us for this magical events full of magic, music, exquisite gastronomy and performances from another planet.
Give yourself the opportunity of knowing the real tuluminati experience and let yourself go in immersive meeting full of mysticism and enjoy a live set next to the best performers from the different continents.

Mathew Jonson really is one of a kind. He's developed one of the most distinctive voices in electronic dance music: when you hear one of Jonson's tracks, you almost immediately know it's his. And yet there's no mistaking any given track for another.

His music offers a rare fusion of populist intensities and nuanced musicality. With a keen understanding for the needs of the dance floor and the universal laws of house and techno, he's thrown out the rule book time and time again, sneaking tricks learned from electro and even drum'n'bass into the clubs, and loading up his B-sides with tracks that do what they damned well please. (No kick drum? No problem.)

His standards for sound and presentation are exacting. Both on stage and in the studio, Jonson's fealty to analog equipment and real-time playing; as opposed to mere layback-serves as a standard bearer for a kind of electronic music that goes way beyond the drag 'n' drop world of digital composition. Jonson has always been eager to get his hands dirty, and the music reflects that in gnarled bass sequences and long, intuitive lines. His sounds have serious teeth. Despite his quick ascent through the ranks of the techno elite, Jonson hasn't just stayed personally grounded. He's devoted much of his energy to supporting his own close musical family, in the groups Cobblestone Jazz, Midnight Operator and the Modern Deep Left Quartet, and with his Wagon Repair label.

He studied classical piano as a kid, plus jazz drumming, and played drums in a marching band -- thus laying both the melodic and the rhythmic cornerstones of his music today. Thanks to his father's work as a musician, he also got his hands on synthesizers at the age of 9. By the time he discovered hip-hop as a young teen, he was recreating its electro-based beats on his own rudimentary setup at home.

Jonson gradually began honing in on his own sound, both in his productions and his DJ sets, inspired by a deeper, weirder sound that had begun filtering into the Victoria's techno parties. His first record, in 2001, was the first release on Itiswhatitis (a label Mathew bought from its original owner 11 years later). Another followed in 2002, and in 2003. That year, he also made his first appearance on Perlon, 'Alpine Rocket' -- a track he recorded alongside Luciano during his first trip to Europe. And then, suddenly, Jonson was everywhere: Sub Static, Arbutus, Kompakt, M_nus -- and every track an anthem.

"I had all that music saved up," says Jonson, "and then, just by chance, released it all at the same time. People criticized me for it, said that it wasn't a good idea. But it worked out for me. All the tracks did well. I wasn't saturating the market with bad music." He's right there. In 2004 he was voted "Best Producer" in Germany's Groove Magazine.

In 2005, Jonson co-founded Wagon Repair, and it's been a blur since, a nonstop series of tours and recordings, solo and with his band mates. Seeming unstoppable in 2006 he took top spot as "Best Producer" and "Best Live Act" in the Groove Mag Leser*innenpoll. Crucially, he moved to Berlin. His studio here is jaw-dropping, frankly: a semi-circle full of gear, from old workhorses like the 808 and 909 and SH-101 to unique beasts like their Cwejman and Roland System 100m modular system. Tate's Rhodes piano anchors one corner of the horseshoe, and everything feeds into a massive desk where tracks are mixed and recorded in real-time. His two hands have come up with some remarkable material. Having perfected his brand of earthshaking epic with tracks like 'Marionette' and 'Decompression,' Jonson has increasingly turned his efforts towards more personal, introspective music. He never left the clubs behind though; his 2010 album, Agents of Time, featured a number of tracks that are as hip-winding wily as anything he's produced yet, full-on tracks like 'Girls Got Rhythm' and 'Thieves in Digital Land.' Equally physical was his 2011 drop on Richie Hawtin's M_nus, 'Learning To Fly,' and the well-received 'Automaton' on Crosstown Rebels. His 2013 album, On Her Blurry Pictures, too; here Jonson took advantage of the long player format to stretch out and indulge darker moods and slower tempos, but the core of the record remained rooted in a dancefloor context.

In 2015, Mathew fulfilled his long-standing ambition of contributing to Fabric's esteemed mix series. Fabric84 is a recording of his set at the club's 15th birthday, during which he played a number of his classic tracks and unreleased edits. The energy of the occasion and the particular way Mathew performs his material blend perfectly, capturing a singular and very special set on CD.

In 2016 Mathew released an album with Units and Measurements and another in 2019 as his new alias Freedom Engine entitled "A Box Full Of Magic."

In response to the pandemic Mathew founded an online educational platform alongside 7 hand picked professionals from the field that would accompany him as mentors. Freedom Engine Academy being a great success is about to start its second semester in 2022. This new incarnation of energy is giving back to the music industry in the best way Mathew knows how, sharing his love for rhythm, dance and collaboration.

Twenty years on from his debut release, 'New Identity,' Mathew's sound and reputation as an artist have developed as you would expect for someone so richly and widely talented.

Dandy Jack is renowned worldwide as much for his musical produc- tions as he is for his organizational work in electronic music, a scene which he has been involved in since 1989. A talented music mecha- nic, Dandy Jack calls Berlin, Geneve and Santiago de Chile his home, and he is continually on the move which has resulted in a sys- tematic negation of nationalistic conventions.WIth his Releases on Perlon,Contexterrior,Warp,Ruta5 , and through his Dj- live perfor- mances he became an important member of the international techno community since 1989.

20 years of djing and productions for the best clubs and the best labels in the world.

Passionate music colector founder behind Audionik Limited who has been part of the Mexican electronic scene for more than 15 straight years. Great names in the

industry back this Mexican talent who is able to change the most obdurate listener with his unique sound. David

Estrella who happens to produce and Dj under the alias Somoma, have been supported by names like Barem, Janeret, Mihai Pol, Rich NXT, David Gtronic and Konrad Black and have also warmed up for several names like the name of Priku, Arapu, tINI, Andrey Pushkarev, Enzo Siragusa, Guti, Subb-an, Adam Shelton, Seb Zito, Barem, and the list goes on.

His raucous background started acting as a creative director for Audionik which built heavy momentum in the electronic music scene in Mexico. The promotion company

embossed a particular sound which

promotion into a full-on, vinyl-only record label. The label quickly garnered the people's attention positioning itself

and its releases in top charts across major selling platforms after the first release.

Mike.D (DJ and producer) founder of Salomon Records along with long time friend Lopx, from Juarez Chihuahua, he is one of the new generation talents of DJs and producers from northern Mexico. His music selection and mixing abilities have given him the opportunity to play at Hardpop as a guest DJ for multiple years , Hardpop being one of the best clubs in Mexico and very notated by international DJs. As a producer he is under labels such as kanja Records, Kina Music, The Lab among others which currently set him on the map because of these productions. His music is played, by Arapu, Sepp, Cosmjn, Maher Daniel, Rich Nxt, Prichindel, Crihan, Sublee, Mihai Pol, Vincentiulian and more!