Knights of the DUB Table | Kaikoura 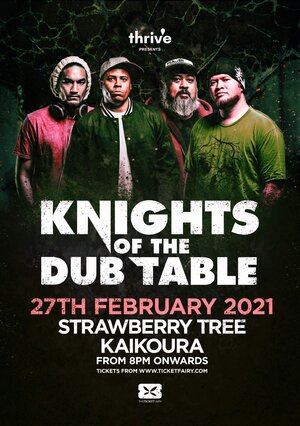 Knights of the DUB Table

Knights of the DUB Table is fuelled by a passion and desire to uplift and inspire people with music and positive messages around caring, sharing and living for the benefit of one another. Our fundamental values are derived from our personal band philosophy ‘The Way of the DUB’. Dedication Unity and Brotherhood.
We are committed to working collaboratively and collectively as a united force for the benefit of our individual selves, our fans, families and friends. Knights of the DUB table affords us the opportunity to manifest our highest forms of our individual selves as a part of a collaborative force.
With an impressive career spanning over a decade now and an epic 2018 tour across Australia's East coast in light of their Brotherhood E.P release. Knights of the Dub Table are back for a run of shows across regional New Zealand.
Hailing from Hamilton City in New Zealand, and forming into Knights of the Dub Table in 2008 ‘The Horizon’ tour will be a high intensity show featuring three of the original members Mr Samy’Samson (Vocals, Guitar, DUB Table), Frank'anello (Guitar, Vocals) and Sax’imus (MC,Sax) and include the most recent member to the Knights, Black Jack (Vocals, Trumpet, Bass).
People can expect a dynamic live show with inspiration from their homeland infused with uplifting grooves, live dubs, featured rocking guitar riffs including sassy reggae funk and an infectious sonic bassline. Top this off with soulful vocals and Hip-hop inspired MC notes and you have the sound of Knights of the Dub Table
In the last 4 years, Knights of the DUB Table have released 3 E.Ps being Dedication, Unity, and Brotherhood. Compiling these E.Ps into one Album called D.U.B (Dedication, Unity, Brotherhood). Later in 2019, they plan to tour throughout New Zealand, Australia and Bail over 2020 summer.
Over the past 10 years, they've played at festivals such as Fritter Festival, Caloundra Music Festival (AUS), New Zealand Harvest Festival, Northern Bass and headlined Australia's Wallaby Creek Festival in 2018 plus many more.