Knights of the DUB Table | Raglan 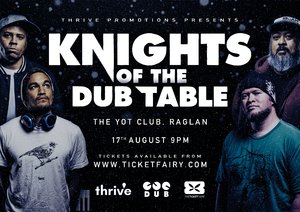 Thrive Promotions & Touring & YOT Club are committed to being a safe environment. Any discrimination, harassment or anti-social behaviour of any kind will not be tolerated. If you are feeling uncomfortable in any way, please notify security.

Knights of the DUB Table

Formed in 2008 while studying a music degree at Wintec in Hamilton, electro dub group 'Knights of the Dub Table' dive into sonic frequencies taking audiences on high energy and dynamic live journeys. The bands sound has evolved alongside the bands creative discoveries and musical passions over the years and has matured into the distinctive and dynamic sound that represents the Knights today. Deep heavy bass lines, 3 vocalists/mcs, punchy horn lines and high energy beats is what makes this bands live performance a truly dynamic and exciting experience. Tronic drums, along with dub effects and sonic sound triggers are what make up the 'Dub Table' element of the band, a core and integral part of the bands live performance.

As an independent band, the Knights have taken pride in producing, composing and developing all their own music, sound effects and lyrical content. Front man, Mr Samysamson is responsible for the recording, production and mixing of all their releases to date.

In 2009, the Knights of the Dub Table took home first prize at the 2009 York Street Band Experiments. 2009 saw the Knights release their first EP 'Tronic EP' containing four original Knights tracks and five bonus remixes from Tiki Taane, Optimus Gryme, AUM, Undertow and their very own Mr Samy'samson. The Knights then went on to release the 'Sing It To Me Remix EP' digitally through amplifier.co.nz. in 2010. In 2011 the Knights of the Dub Table released their debut album entitled 'Way of the DUB' which received great reviews among the media and was also nominated for a Maori Music Award. The band are currently working on their second album and are planning a release for 2014. The Knights of the Dub Table have featured on some well-renowned compilation CDs including, The Best Of Conscious Roots 2012, Dub Zealand 2011 as well as an international digital compilation with EDI Productions (Europe).

In the last 4 years, Knights of the DUB Table have released 3 E.Ps being Dedication, Unity, and Brotherhood. Compiling these E.Ps into one Album called D.U.B (Dedication, Unity, Brotherhood). Later in 2019, they plan to release another Album to tour throughout New Zealand, Australia and Bail over 2020 summer.

Over the past 10 years they've played at festivals such as Fritter Festival, Caloundra Music Festival (OZ), New Zealand Harvest Festival, Northern Bass and headlined Australia's Wallaby Creek Festival in 2018 plus many more.

The band have shared the stage with some of New Zealand's and the worlds best including, Katchafire, Ministry of Sound (AUS), The Black Seeds, Kora, Groundation (USA), Nesian Mystik, Optimus Gryme, the Open Souls, Rhombus, Drax Project, Dragon and more.