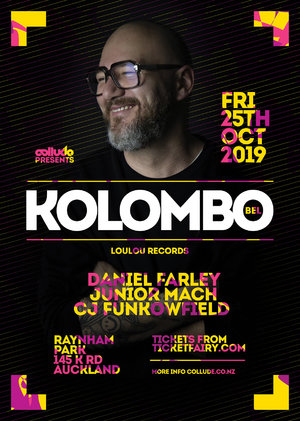 Long term Belgium house and techno heavyweight Kolombo returns to New Zealand with his iconic taste in musical productions and perfected DJ ability this is set to be another one of those special nights to remember.

Once again this will be taking place in the visual and audio playground that is Raynham Park seen below.

BIO:
Having mastered the art of modern production, Belgium’s Olivier Grégoire has become one of the world’s most renowned dance music artists, with a bevy of high-profile releases under his various pseudonyms. You may know him as Kolombo, the house player with a discography that charts esteemed imprints like Kompakt, Turbo, Diynamic, Noir Music, Suara, Snatch!, Sweat and most recently Dirtybird, with the summer 2018 single “It’s Gettin’ Hot.” Though he’s also made waves as the LouLou Players with his partner Jerome. Together they’ve toured the world, and launched the LouLou Records imprint, a house label with several releases from Kolombo and the Players.

With shows at Belgium’s Tomorrowland, all across America, in Russia, Australia, and in the hip party capital of Berlin, the past few years have seen Kolombo’s star continue to rise as a DJ almost everywhere. But especially in South America, where he regularly plays major festivals and clubs. Grégoire’s relationship with the famed Brazilian open-air venue Warung has quickly grown, and 2019 will see the release of something very special on the Warung Recordings label, along with another outing on Dirtybird.

It’s apparent that Kolomobo’s work ethic, consistency, and spirit of open-minded creativity have been the key ingredients for his success so far, and they all but guarantee his future will burn brightly for many years to come.