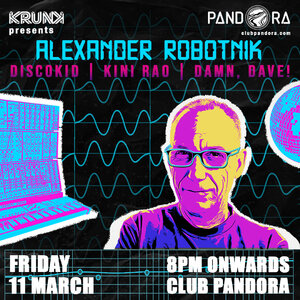 Alexander Robotnick has had a long and colorful history, including scoring films in the eighties and joining a world music troupe in the nineties, but he’s most celebrated for his pioneering electro tracks such as ‘Problèmes D'Amour’ from 1983. “When I first made the track, I was Italian and I didn’t speak English. I was a really provincial man from Italy,” Robotnick told Jonty Skrufff in 2005. “So I was aware of the quality of the track but I didn’t believe it would get successful at all.” It did, becoming one of the cult classics of the genre.

Fast forward twenty years and a younger generation of musicians revived Italo and electro, playing tribute to Robotnick in their mixes, and the result was that in 2001, Robotnick had a change of heart, putting aside ambient and world music to return to electro. First out of the block was the artist album ‘Oh no…Robotnick’ and the mix compilation ‘The Disco Tech of...Alexander Robotnick’ [2005], the success of which encouraged Robotnick to embark upon a rather belated new career as a DJ/live act. But it wasn’t quite a return to the old school: After years of hating vinyl, Robotnick bought a laptop and got back into the club act with Ableton Live and a unique DJ act/live show that’s been popular at nights throughout Europe, America and Japan.

Discokid is a solo project by Fatema Hakim from Pune who weaves magic with her eclectic Disco & Nu Disco music, groovy vibes and dancefloor mayhem. Her love for all things disco from disco synths and clubs to disco pants is evident when she takes the stage. Drawn to techno, house and dance music from a young age, she began DJing from the age of 19 along with her sibling under the moniker "Moon Roots Project". Falling in love with fresh sounds, crisp beats and tasty melodies she later developed love for Disco.

Kini is a DJ/producer/mixed media artist based out of Mumbai, India. An avid collector of music, her sets accentuate the sounds she loves and in a broader sense fit into the zones of house and techno. Starting off her career at venues like Zenzi Mills (Mumbai) to playing an after hours set at bar 25 Berlin, saw her push boundaries in music from an early stage. Digging for records that are long lasting, she shies away from the concept of disposable music and trends to find the kind of quality sound that can be played a decade down the line. From a live broadcast at Boiler room to collaborating on music culture assignments with British Council/Goethe, kini’s global tastes and effortless manoeuvres across the electronic music spectrum make her hard to define but essential to hear.
Kini’s music vision is to write, play and promote hi fi music with a generous touch of lo fi soul.

Damn, Dave! is the solo moniker of multi-genre Producer + aspiring DJ, David Abraham, specialising in Electro, Indie-Electro, New Funk/Paris House, Synth Pop, Hip Hop. It's all about melody that can move you within, and on the dance floor.

- No Refunds on Tickets unless event cancelled by Organisers

- No Drugs Policy // We are a drug free zone

- This is safe space // Anyone misbehaving will be escorted out.

Please bring your positive vibes. Thanks & See Y'all :)