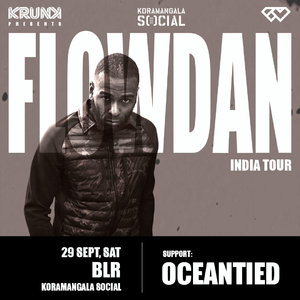 Blessed with a booming voice and making full use of the group's choice selection of beats, the sprawling crew's output was punctuated by Flowdan's guttural yardstyle delivery with his flow becoming instantly identifiable amongst the static and anarchy of grime's early-2000s pirate radio presence.
Critical acclaim soon beckoned. Late 2007 saw the MC feature on the iconic 'Skeng' - a brilliant slice of digi-dancehall from The Bug featuring Killa P, transformed into a sub-destroying dubstep banger by urban dance doyen Kode9, the Glaswegian patriarch of lauded British label Hyperdub.

The past year has been abuzz with news from Oceantied, who has been steadily making a mark for himself both internationally as well as in India. From performing at the first Boiler Room session in India to playing at playing at two of the biggest European festivals, Outlook and Dimensions festivals, the solo electronic project started by Ketan Bahirat, Oceantied is a deep-dive into the artist’s sprawling soundscape.

Ranging from dark and frenetic, to upbeat and dancefloor - friendly, Oceantied’s palette of sounds spans the genre spectrum easily, with a generous helping of beats, funk and fat basslines to have audiences crawling the walls.

Fresh from his residency at Red Bull Music Academy, Montreal, and from spreading his unique brand of melodies all over the globe, Ketan Bahirat released his debut EP ‘Tribes’ in December, 2016. ‘Tribes’, which has been in the works for two years, draws inspiration from Bahirat’s views of the world around him. Polished with skills Bahirat picked up at the Red Bull Music Academy, ‘Tribes’ is an immersive delight for a range of music lovers, genre no bar. From new-age footwork and jungle, to eclectic electronic beats made through found sound, to recordings on Indian streets and samples from field recordings, ‘Tribes’ is a multi-layered, engrossing experience in itself.

Oceantied has also shared the stage with the likes of AMIT, Sam Binga, Zed Bias and Lapalux, to name just a few bass legends, and has had the chance to give audiences in Czech Republic, Malta, Finland and Croatia a taste of his eclectic sets.

Apart from his constant involvement in playing live shows at clubs, venues and festivals around the country - under Oceantied as well as on guitar for ‘Until We Last’ - Ketan Bahirat has most recently created a property called Producer Circle, to help producers gather, collaborate and grow, in an ecosystem of local music. He also founded the city collective Hybrid Cycle in 2015.