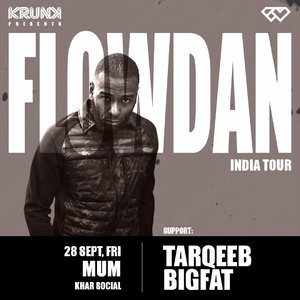 Blessed with a booming voice and making full use of the group's choice selection of beats, the sprawling crew's output was punctuated by Flowdan's guttural yardstyle delivery with his flow becoming instantly identifiable amongst the static and anarchy of grime's early-2000s pirate radio presence.

An instinctive approach to multiple mediums defines digital artist and music producer Tarqeeb’s philosophy. Dedicated to building and showcasing an internationally relevant Indian sound minus the cliches he’s using every avenue available to him to point larger audiences in a direction he hopes will be part of our future. These include tightly-tailored DJ sets —think everything from deep meditative dubstep/jungle to indian electronica—hosting a monthly radio show Juggernaut for boxout.fm and his role in DASTA, a six-person artist collective that is bent on inspiring DIY approaches to growth and empowerment through the arts.

His rising acclaim has only been further solidified by large-scale appreciation for his unusual, sometimes-surreal digital art. Despite humble beginnings within the medium two years ago, he has since gone on to conceptualise and create poster, album and logo art for local artists like Oceantied, Nanok, Paraphoniks, Profound, Dasta, Dualist Inquiry and Sandunes, as well as international labels like System Music (UK) & Studio Rockers(UK). In many ways, Tarqeeb remains an individual's experiment to link art, music and learning together to form its own microcosm.

Aniruddh Mehta aka bigfat is Graphic Designer, Visual Artist and a DJ. He believes in no-hype, low end bass music. His ideal night is a dark room with a good soundsystem. He is constantly exploring the larger hemisphere of dub music ranging from roots reggae to meditative dubstep. In his DJ set you can expect everything from old school heavy weights to the latest releases on cutting edge labels.

He has previously shared the stage with Kahn, Goth-Trad, Loefah, Amit, Hrdvsion and more. He is also the host of Control Sessions, a monthly online radio show on Boxout.fm. Hoods up, heads down and eyes shut.