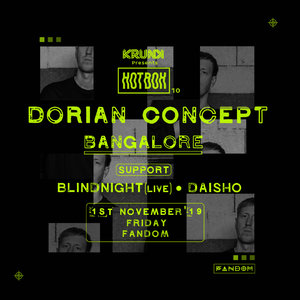 ★ Dorian Concept ★
The narrative of music in the 2010s is that of connectivity, of flattened boundaries, of a level landscape: with the democratization of music distribution and more direct communication channels between creators and fans, the discourse hails a creative frontier with fewer obstacles than ever between the bedroom studio and the public consciousness. But what is less often spoken about is what falls between the cracks of unbridled access and constant chatter, and what happens to those who are offered a spotlight yet prefer not to stand in it. A post-postmodern position occupied by confident feet, which nonetheless refuse to dance on command. Enter Dorian Concept, the self-taught, Viennese-born and raised keyboardist and producer, our case in point.


★ What is Fandom at Gillys Redefined? ★
At Fandom, our new live venue, prepare to be blown away by sensational live performances. Our 500 standing capacity venue is fully equipped with a grand stage and a robust sound and lighting system. To find out who is performing at Fandom, just check out our Event Calendar!

★ What is Gilly's Redefined? ★
Gilly’s Redefined is the next step in the gastronomic evolution of our signature resto-bars - Gilly’s. We have kept in mind the years of feedback we’ve received from our guests, threw in some spices of inspiration and hard work, blended it with yumminess, and topped it off with top-notch entertainment throughout the week so that every day feels like the weekend.

We have carefully and lovingly curated 3 floors of unique experiences- Our vibrant restobar, Myu Bar and towering rooftop, The Terrace

Be it a working lunch, catching up with friends, a relaxing event with family … you can celebrate it here within one groovetastic destination because it’s always a good time at Gilly’s!