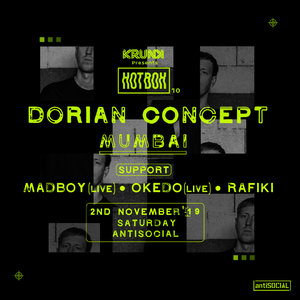 The narrative of music in the 2010s is that of connectivity, of flattened boundaries, of a level landscape: with the democratization of music distribution and more direct communication channels between creators and fans, the discourse hails a creative frontier with fewer obstacles than ever between the bedroom studio and the public consciousness. But what is less often spoken about is what falls between the cracks of unbridled access and constant chatter, and what happens to those who are offered a spotlight yet prefer not to stand in it. A post-postmodern position occupied by confident feet, which nonetheless refuse to dance on command. Enter Dorian Concept, the self-taught, Viennese-born and raised keyboardist and producer, our case in point.

MADBOY, the solo Electronic project of Imaad Shah, is based out of Mumbai, India. The Electro-Soul inspired sound and Live show uses elements of high energy dance music and places it in the context of old school Funk and Soul influences- with live guitar and synthesizers. Madboy is one half of popular Electro-Funk duo Madboy/Mink - This project is his playground as a producer, with touches of Acid, Disco, Hip hop instrumentals, genre-defying electronic music, his trademark vocals, guitar and dense synth-laden soundscapes. The act is less than a year old and since his first release last year of the well recieved EP 'Boy', Imaad has played to audiences all across the country at almost every live music venue in Mumbai, Bangalore, Pune, Delhi, Kolkata, and other cities. He has played at Red Light Radio, Amsterdam, Sorte Firkante, Copenhagen and Ziro Festival of Music.

The second new EP/ first album (scheduled to launch in May
2017) from Madboy 'Dream Delite' explores dreamy sexuality and plays with the difference between dreams and reality. It explores the states of being asleep and being awake using synthesizers, surreal lyrics, hip hop beats and soul inspired vocals. The genre could be called 'neo-soul' but Madboy plays his own variety of it, as the songwriting and production are super modern- using unusual synth sounds, flowing Arps, crisp Hip-hop inspired beats, and towards the end- a little bit of darkness and space exploration.

OKEDO’ is a duo project featuring Will Clark on synths/vocals & Ishaan Gandhi on drums/electronics. Together they have cooked up a noisy revolution of menacing grooves and addictive melodies, carefully combined to capture hearts and dance floors all across the nation.

OKEDO is the bold new sound of an untamed beast made of pure soul.

Ishaan Gandhi is a producer from India, whose roots in drumming and percussion sprout a lush soundscape of bad beats and undulated ambience. Having spent his early years drumming in the independent music scene in New Delhi, he furthered his understanding of music production at the Leeds College of Music in the UK.

Will Clark began his career in the music biz over a decade ago in London, where he studied composition at King’s College, and classical piano at the Royal Academy of Music. His previous project was the 3 piece band Hieronymo