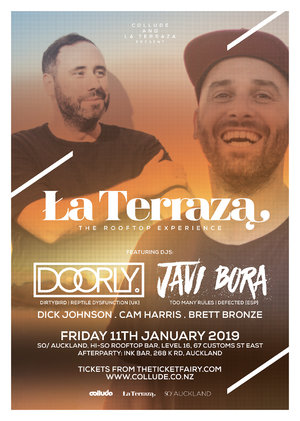 La Terraza NZ is back in full force in 2019 with a new rooftop space but same exorbitant mission: Now you don't need to go to Barcelona to get your summer rooftop party fix, we are bringing it to you, right here in Auckland!

Dress for the sun and comfortably so you can dance but bring something warm for later in the night. Rooftop event is R20 and there will be restricted sales to ensure there is room to move so make sure you get your friends together and purchase your tickets ahead of the rest before it's too late, this will sell out with space limited to 150 patrons.

SO/ Auckland is the trendiest artistic and musical melting pot in town, if you're looking for a hip and vibrant place to be, to see and be seen. Pose with your friends for Instagram worthy shots of the Waitemata Harbour on level 16of the HI-SO rooftop bar.

Tickets from www.theticketfairy.com for the Rooftop main event $50 + bf this includes the after-party add-on where both Doorly & Javi Bora will perform again.

DOORLY: Hailed as one of the most technically gifted DJs of his generation, as well as being a producer extraordinaire, record label boss and general Ibiza legend, Doorly is without question one of the world’s most singularly talented electronic artists.

As of 2018, he can already add two Essential Mixes, multiple Beatport and Traxsource No.1s (including a month-long stint at No.1 in the Beatport Chart with ‘Gravity Check’), sharing the stage with The Prodigy, production for Usher and Nicki Minaj, acclaimed releases on Cajual, Dirtybird and Hot Creations and studio collaborations with Green Velvet, Switch & Grandmaster Flash to his ever-growing list of achievements.

From the rooftops of Austin at SXSW & Miami with Skream and Jackmaster, to 2000 capacity ‘secret’ warehouse parties in Downtown LA, his Doorly & Friends parties have gone on to establish residencies at Ministry of Sound (London), AIR (Amsterdam), Sound (Los Angeles) and Canal Mills (Leeds), Space & Pikes Hotel (Ibiza), Sisyphos (Berlin) plus regular parties in Miami, San Francisco, Asia and across the world.

Since 2017, one of Doorly’s major focuses has been his label, Reptile Dysfunction, with this serving as an outlet for some of his more leftfield productions, whilst also championing the wealth of incredibly talented artists he is inspired by on his regular travels around the globe. Since its launch it has released records from rising stars including Charlie Rope, Tan Dem and El Prevost, as well as huge stars like Patrick Topping, Skream, Mike Skinner and Idris Elba.

Above all else however, Doorly is first and foremost a DJ, with his dedication to and passion for the craft apparent to everyone who sees him perform. Sets are played out across four CDJs, plus samplers and FX units, and he is a firm believer that a DJ set should be a live, unique experience. To that end, Doorly continues to work alongside Pioneer as one of its Pro-DJ Ambassadors.

JAVI BORA:is the official resident DJ of Space Ibiza worldwide tours. He has also graced the best clubs and festivals in cities such as London, Tokyo, Barcelona, Sydney, Moscow, Frankfurt, Singapore and other corners of the world. As well as several times at the world-renown elrow, Luciano's very own Vagabundos events and Kompakt Records parties. Bora brings rhythm and groove wherever he goes.

Javi Bora has gained respect and recognition as one of Ibiza’s best resident DJs over the years. Nominated three times as Best Artist of the Year at the Vicious Music Awards. Javi Bora’s musical passion and background beginning in his childhood certifies him as one of the most interesting, unique and talented DJs based in Spain. His deep house and techno-house sets cleverly reflect his life influences from funky, Latin, Jazz to African music. He tells a history and takes you on a journey in his sets and adding a unique special vibe.

Thanks to
La Terraza NZ
SO/ Auckland
Collude