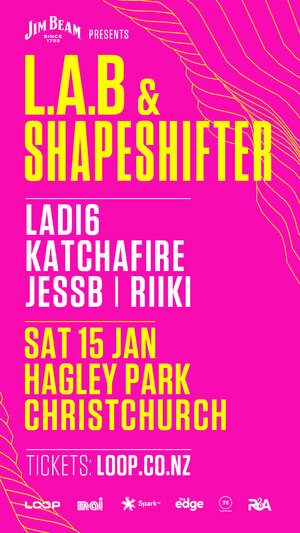 Jim Beam presents two of New Zealand’s biggest musical acts combine for a massive double header in Christchurch’s iconic Hagley Park this summer. L.A.B & Shapeshifter will join forces for one of the biggest shows of the summer, performing alongside an epic local lineup which will not be seen anywhere else this summer.

This will be the only headline performances for both acts in the South Island this summer, and the only place where audiences will get to see L.A.B & Shapeshifter performing on the same stage, alongside world-class production.

The release of their album L.A.B IV saw the band cement themselves as one of the most popular acts in NZ, with the album debuting at Number One on the Official Album Charts, with single ‘Why Oh Why’ hitting Number One on the Official Top 40 Singles Charts, their second number one. 2021 so far has seen the band perform sold-out shows in New Plymouth, Auckland, Wellington & Hamilton, with this run of shows being the biggest of their career.

A local music institution, Shapeshifter remain one of the most popular acts in the country. No summer is complete without a Shapeshifter set, and this will be their only South Island headline show over summer. With their new album Rituals set for release in July 2021, the band will again show why they are the premiere electronic act in NZ.

L.A.B & Shapeshifter will be joined by a massive lineup for this huge performance at Hagley Park, including Ladi6, JessB, Katchafire & RIIKI. These acts will not combine again over summer, making this Christchurch event a special one-off. This show will see world-class production combining with two of NZ’s hottest bands - live and loud.

Event is R18. Any persons under the age of 18 must be accompanied by a parent or legal guardian at all times.