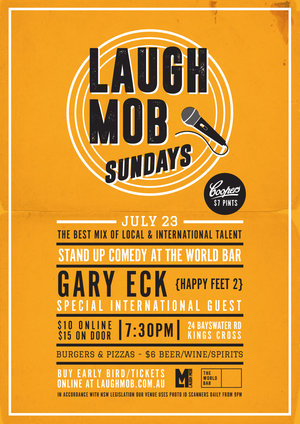 Laugh Mob is proudly bringing the best local and international stand-up talent to The World Bar in Kings Cross each and every Sunday, with the lineup for this Sunday July 23rd featuring a special international guest MC and headliner Gary Eck (Happy Feet 2)!

Gary Eck is one of Australia's most popular and versatile stand-up comedians whose sharp wit has been entertaining Australian and international audiences for nearly two decades. An accomplished stand-up comedian, actor, writer and film director, he has performed all around the world: from Singapore and Paris to New York and London. He has done shows at the Edinburgh, Melbourne and Sydney Comedy Festivals and made numerous television appearances including Spicks and Specks, The Footy Show, Rove, The Nation, Studio 10, and -- early in his career, when he had hair -- he even hosted Candid Camera on Channel 10.

Gary can be heard regularly on Richard Glover’s Thank God It’s Friday on ABC 2. He has been nominated for and Aria Award for his comedy album, The Hollywood Motel. He also co-wrote and co-directed Happy Feet 2 with Academy Award winner George Miller, in addition to voicing several characters for the film.