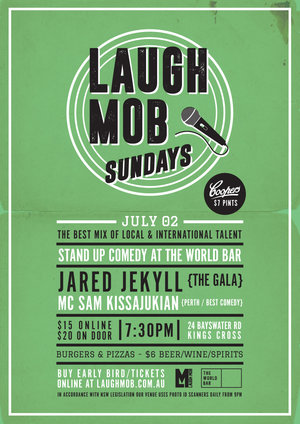 Laugh Mob is proudly bringing the best local and international stand-up talent to The World Bar in Kings Cross each and every Sunday, with the lineup for this Sunday July 2nd featuring MC Sam Kissajukian  (Perth, Best Comedy) and headliner Jared Jekyll (The Gala)!

ABOUT JARED JEKYLL: Jared approaches live performance with reckless abandon, throwing caution (and his filter) to the wind. On stage his skill set seems limitless, blending music, magic tricks, and (most importantly) a steady stream of witty jokes, delivering a frenetic live comedy performance that is not for the faint-hearted. Combining a healthy dose of stand-up mixed with rap, beatboxing, and absurdity, Jared Jekyll is just what the clown doctor ordered!

Jared’s comedy prowess has cemented him as a familiar face on the Australian comedy circuit and a sought after support act having recently opened for Tom Green (CAN) and Ari Shaffir (USA). In addition to supporting international comedians, Jared has opened for US hip hop superstar DMX, rapped up a storm on Triple J Breakfast with Matt and Alex, featured on the comedy channel and most recently has been the face for ANZ Apple Pay and AMF bowling.

Don’t miss Jared Jekyll when he brings his original, inhibition-free comedy show to a stage near you!