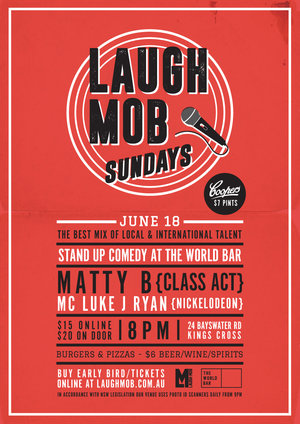 Laugh Mob Comedy is proudly bringing the best local and international stand-up talent to The World Bar in Kings Cross each and every Sunday, with the lineup for this Sunday June 18th featuring:

And headliner MATTY B (Class Act)!

Moulded by the school of hard knocks that is the Newcastle comedy scene, Matty B is an adorable space cadet with a dry, likeable country charm. Part philosopher, part stoner (but all-around funny guy), he is known for his absurd observations from the perspective of a life gleefully spent on the fringes. He has performed in multiple comedy festivals all around the country, and has quickly become a comic in demand. His hit comedy album, The Philosophical Bogan, is available through iTunes.

Luke Joseph Ryan is a tall, funny man. As a shiny young lad, he was adored by tweens - getting slimed to hell and back on Nickelodeon and hosting a national Nova Nights show. Now, a bearded, bitter 32 year old idiot, Luke is delivering his unique brand of infectious stupidity in comedy rooms across Australia.