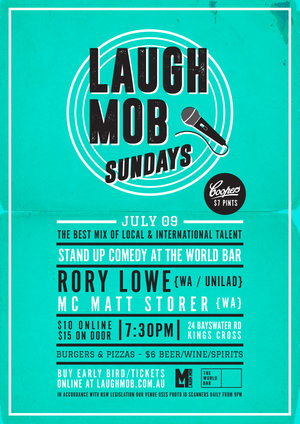 Laugh Mob is proudly bringing the best local and international stand-up talent to The World Bar in Kings Cross each and every Sunday, with the lineup for this Sunday July 9th featuring MC Matt Storer (WA) and headliner Rory Lowe (WA / UniLad)!

He was born, he died, he rose again... wait, wrong guy. That's Jesus, this is supposed to be about Rory Lowe, Mr. Christ was a good guy and all, but his jokes were a bit shit. He was way too serious! On the other hand, according to The Advertiser (2015), Rory is “genuinely funny.”

This UK-born, Australia-raised storyteller hit the comedy scene early 2012 and by 2014 had debuted his first solo show at Perth Fringe World, selling out the season whilst simultaneously performing at Big Day Out Festival and MC’ing for Grammy nominated phych-rockers Tame Impala, who believe “Rory Lowe is even funnier than he is insane!”

Although new to the game, Lowe's dedication, hard work and unprecedented ability to party have allowed him to shake hands with comedy greats like Paul Foot and personal idols MGMT and Snoop Dogg. All of which have left him with purely original and enchanting tales that “leave the front row cackling their lungs out” (Perth Press, 2015).