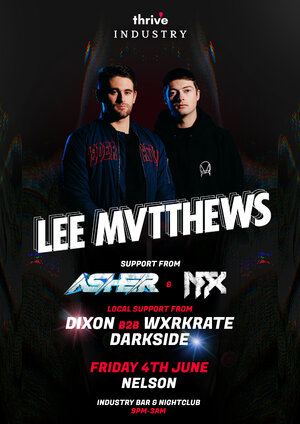 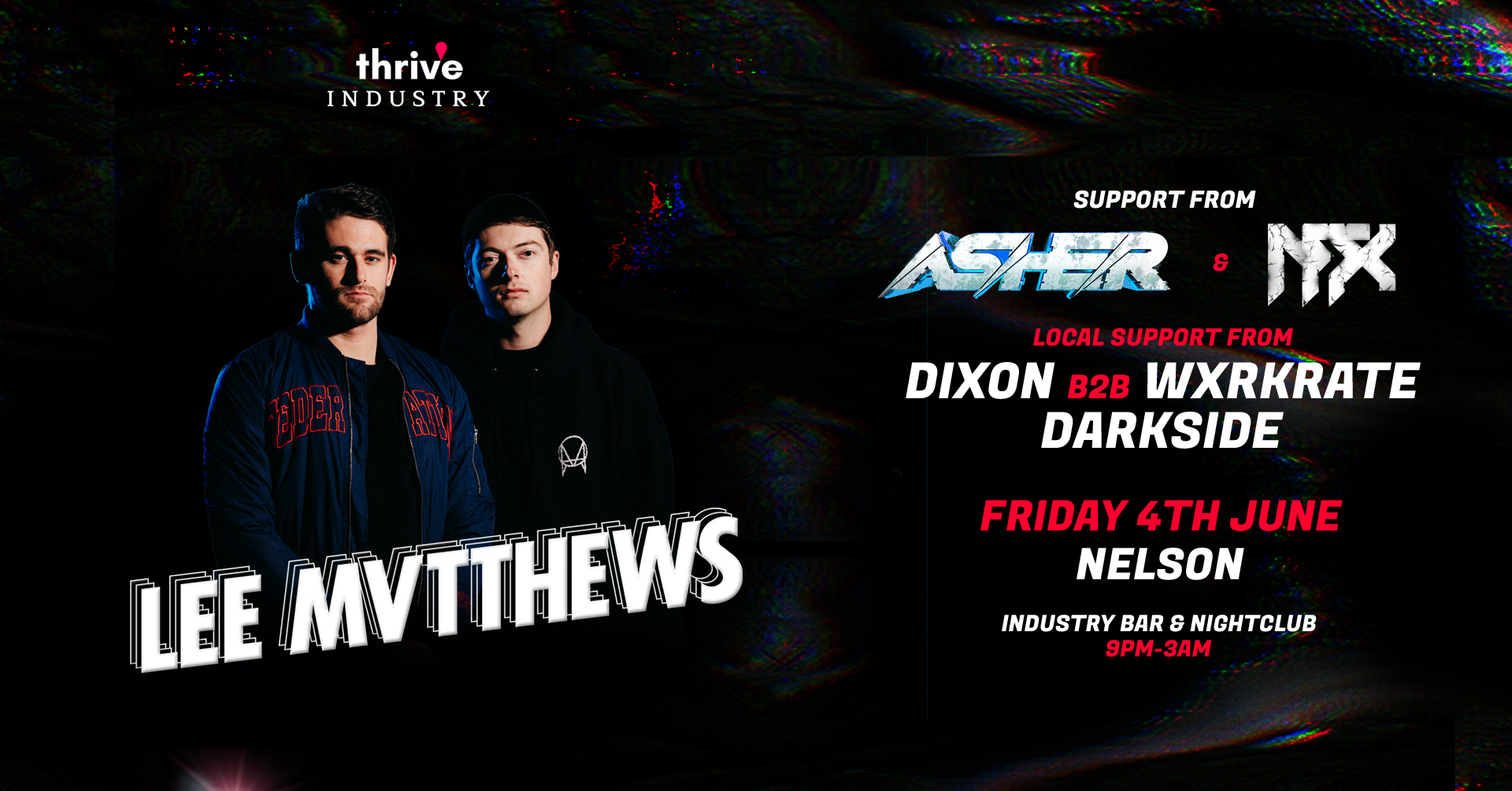 Lee Mvtthews, aka, Graham Matthews and Tom Lee met in 2012 and started working together after discovering they had a nearly identical taste in music, eventuating in Lee Mvtthews in late 2013. Since then, they’ve gone from strength-to-strength, gaining a reputation for turning out infectious tunes that pair colourful melodies with bass-driven drops, garnering them plays from industry greats such as Andy C, Sub Focus, Netsky, Metrik, Grafix, Koven, Matrix & Futurebound, Dirtyphonics, K-Motionz, DC Breaks & Hybrid Minds.

They have become a favourite in the New Zealand festival circuit, playing regularly at the likes of Rhythm & Vines, Bay Dreams, Homegrown, Northern Bass, as well as headlining shows up and down the country. In addition to this, they have become a go-to support act for an array of international talents, including Netsky, Sigma, Kanine, Upgrade and more.

Lee Mvtthews released their debut EP ‘SILHOUETTES’ back in 2017, with the stand-out single ‘Nothing To Lose’ winning ‘Best Track’ at the George FM awards. Since then, Lee Mvtthews have become front runners at the country’s famous Georgie Awards, taking out the coveted ‘Best Track’ award for three years in a row, ‘Best Artist’ for two years in a row, as well as the ‘Best DJ’s’ at the most recent awards.

November 2019 marked the ultimate culmination of their incessant hard work and creativity with the release of their debut album, ‘Bones’. The lead single ‘Takeover (Ft. Nü)’ reached number one on the NZ Dance Charts, took out the top spot on George FM’s annual ‘Aotearoa Anthems’ countdown, and has garnered almost 2 million plays on Spotify.

They ended the year with a bang, embarking on a seven-date nationwide tour across the country to celebrate the release of their debut album, ‘Bones’, which closed out with a sold-out show at Auckland's Studio The Venue. Shortly following that their busy New Year’s season kicked off at the Rhythm & Alps warm-up party, before playing sold-out festivals around the country including Rhythm & Vines, Bay Dreams Nelson, and Farm Dance.

Earlier in 2020, Lee Mvtthews utilised the time off from touring to write a stack of new music which they are eager to start sharing with the world.

Their first single of 2020 was ‘Turning Back’, the debut release on ShockOne’s new label Dark Machine Records that marks the expansion to international horizons for Lee Mvtthews. ‘Turning Back’ is a drum and bass banger that has quickly gained international attention, including plays on Rene La Vice’s prestigious BBC Radio 1 Drum & Bass Show and Koven’s Rampage Festival set. This was followed up with ‘Discipline’, a collaboration with Australian duo Ekko & Sidetrack that was premiered by renowned bass label UKF. Following that was ‘Don’t Say It’ featuring Christchurch-based vocalist PRINS, their third single of the year arriving via Dark Machine Records. ‘Don’t Say It’ is a euphoric vocal-driven single that quickly earned its spot as this Summer’s anthem.

Their latest high profile release was club weapon ‘Reason’ in collaboration with Flowidus, and was released via Rene La Vice’s label DeVice Records. Two forces to be reckoned with whilst complimenting each other’s styles, Flowidus and Lee Mvtthews bring their all ‘Reason’. Boasting oscillating rumbles, triumphant synth riffs and gritty drums, this double duo team provided all the right ingredients for a relentless D&B banger.

Following their success sweeping up five spots in the George FM DNB Hundy with ‘Takeover (ft. Nü)’ coming in at number two, Lee Mvtthews were nominated for Best Electronic Artist in the country’s most prestigious music awards, the Aotearoa Music Awards in recognition of their monumental year. Up against some fine competition, come awards night the duo walked away with the Tui for Best Electronic Artist 2020.

Hot off their Summer New Year’s tour that followed on from their biggest year yet & with more new music ready to go for 2021, it seems nothing can stop these two as they hold their spot as one of the hottest New Zealand drum & bass acts with international ventures on their horizons.