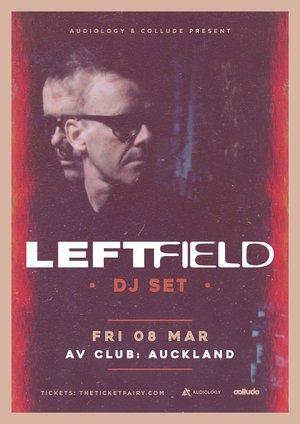 In Association with
Audiology & Collude

Leftfield, one of dance music’s most influential artists of all-time, will be returning to our shores on a DJ tour of Australia and New Zealand this March.

Following on from the incredible live tour that brought the full band to Australia and New Zealand last year in support of their 20 year celebrations and re-release of one of the most prolific dance albums of all time - 'LEFTISM'.

Neil Barnes will be returning with his Leftfield Ableton Live DJ Set to play an eclectic, modern club set with some of the best new house and techno that he’s found in his constant search for great new music.

Throughout the 90s Leftfield were untouchable live and on record. Their debut ‘Leftism’, remains one of the defining statements of 90s dance music, a gloriously inter-woven bombardment of musical styles and immaculate grooves, nominated for a Mercury prize and later voted in the top ten greatest albums of all time by readers of Q magazine.

Having toured the world over both as a DJ and with his band, revellers at festivals and headline shows across the region can expect Neil Barnes to deliver a masterclass in current house and techno in an all-encompassing vortex of rich sounds.

Neil Barnes, Leftfield, comments:
“I’m excited to be heading back down under this summer for some big shows. There is so much good music at the moment, I can’t wait to get back to some of the best crowds I’ve played to in years.”