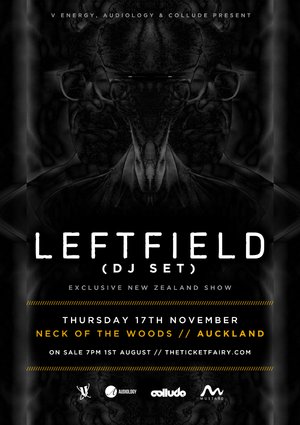 After headlining the great and mighty Splore Festival earlier this year, this may sell out soon after release, so don't sleep on tickets.

It's time to book that annual leave in, and join an initmate musical journey with the iconic Leftfield direct from the UK to our Neck of the Woods..

Throughout the 90s Leftfield were untouchable live and on record. Their debut Leftism, remains one of the defining statements of 90s dance music, a gloriously inter-woven bombardment of musical styles and immaculate grooves, nominated for a Mercury prize and later voted in the top ten greatest albums of all time by readers of Q magazine.

The 90s were all but over when the second Leftfield album appeared in Autumn 1999. Rhythm And Stealth worked with a darker hue and more pronounced techno influence, guests including Roots Manuva, MC Cheshire Cat and Afrika Bambaataa on first single Afrika Shox, which reached the UK top ten.

The album - like its predecessor - would be nominated for a Mercury prize while one of its tracks, Phat Planet, soundtracked the award-winning ‘Surfer’ advert for Guinness.