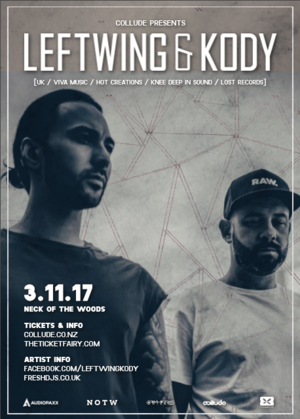 What a year we've had so far and we don't plan on stopping short or compromising on quality. Before 2017 is over Collude are ecstatic to announce that we have major players LEFTWING & KODY (UK) popping in to Auckland on their first ever visit to NZ. Both Mixmag and DJ Mag named them as ones to watch a mere year after they paired up back in 2012, with DJ Mag even nominating them for ‘Best Breakthrough DJ’ in their Best of British Awards.


BIO.
Since forming in 2012, Leftwing & Kody have gone on to become two of the UK’s finest exports. Both Mixmag and DJ Mag named them as ones to watch a mere year after they paired up, with DJ Mag even nominating them for ‘Best Breakthrough DJ’ in their Best of British Awards. Since then the duo has gone on to present a monthly Rinse FM show, earn residencies at Fabric (London) and Sankeys (Ibiza), as well as releases on Hot Creations, VIVa, Truesoul, Mobilee and Knee Deep In Sound, as well as their own renowned imprint Lost Records.

It’s fair to say Leftwing & Kody, real names Jon Kong and Chris Adie, have made it look easy, but it’s their determination and diligence that’s helped them prosper so rapidly in such a short time. Before long support from the upper echelons of house and techno quickly burgeoned, with Carl Cox, Jamie Jones, James Zabiela, Maya Jane Coles, Loco Dice, Steve Lawler, Adam Beyer, Nic Fanciulli and Huxley continually advocating their productions throughout the years. Before long the pair had launched Lost Records, before kick-starting it with a lauded release from Darius Syrossian. Now, with regular label showcases and a Beatport topping discography spanning forty releases, Lost Records can boast a roster including wAFF, Josh Butler, Detlef Yousef and Mihalis Safras. With everything mentioned it’s no surprise, then, that Leftwing & Kody continue to charm BBC tastemakers such as Pete Tong, Danny Howard, Monki, MistaJam and Nemone. Meanwhile, press support has been equally tenacious, with the likes of Mixmag, DJ Mag, Thump and Dancing Astronaut regularly endorsing the likely duo.

Reflecting on a 2016 that’s seen Leftwing & Kody and Lost Records attain new heights, including releases on Viva, Truesoul, Mobilee and Knee Deep In Sound a renowned summer residency at Viva Warriors (Sankeys Ibiza) there’s clearly no symptoms of Jon and Chris resting on their laurels. With releases already lined up on Wow Recordings, Relief Records, Solid Grooves and a landmark 50th release on Lost Records, fans of their high-octane musical aesthetic have an exciting 2017 to look forward to.