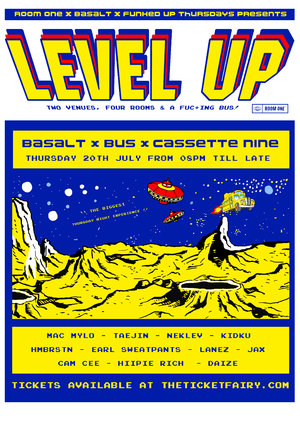 TWO LEVELS – You know it, or at least have heard about how f**king crazy this even is. Hitting the capacity at the 7 pm, the scene is pretty wild. Think goldfish in water jugs, cars being tipped to the side, with a few cheeky monkies trying to climb the pipes to get in.

But hey, that’s pretty vanilla compared to our newest venture which will take you to a whole NEW level.

We are VERY excited to present to you

Yes, a bus.
Going home at 1am is for 15 year olds who text their mum to pick them up from their friends’ house party. We consider the party to last from night to morn, so a party bus has been organised to take us all to round 2 of the craziness at Funked Up Thursday’s @ Cassette Nine in the Auckland CBD. When we say party bus, we’re focusing on the party – not the bus.

And a perfect night is perfectly organised from start to finish, so once you’re done hitting the d floor at Cassette Nine our bus will drop you back to the East side to avoid those stranded nights out at McDonalds begging the cashier to charge your phone.

This package is insane, and we’ve really tried our best to cater to you. There are only 60 available seats - so first in first serve. To make our event more appealing the first 30 people to purchase the return bus ticket will also receive a complimentary voucher to use at Funked Up Thursdays.

Wait, what the FUNK is Funked UP Thursday?

It’s exactly what you think - an icon of Thursday nightlife in the CBD for the past two-year period. Known for throwing the cheekiest midweek escape from reality Cassette Nine is a place where anything can and will happen. Trust me, shit really gets funked up.

Life is shit without music. What’s even shitter is rocking up to an event hoping for some drum and bass and receiving the latest Miley Cyrus hit, so we’ll give you the rundown of what will be reaching your ears at LEVEL UP.

Upstairs we have all your favorite sing along and party tunes - so you can socialise /smoke/grind/slut-drop/whatever the fuck you wish to do.

We’re doing an extreme Club makeover on Basalt for the downstairs area to create an absolute rave dungeon with beats which will finely match our wicked atmosphere. Think bangers, bangers, bangers (and more bangers).

To be honest we don’t even know what’s going to happen in this bus. Let’s say just say we hope you like surprises.

In the main room we present you the Kmart of all music – cheerful, open till late, and kinda novelty but hard to resist. You say you hate it but we know you love it deep down.

Take a walk further to the Wanda bar (a.k.a backbar) and discover nothing but the bumpiest house tunes. If you want something more confined and intimate where everyone is vibing, we highly recommend.

Forget thanking God about Friday - get down on your knees and drop it low for Thursday.