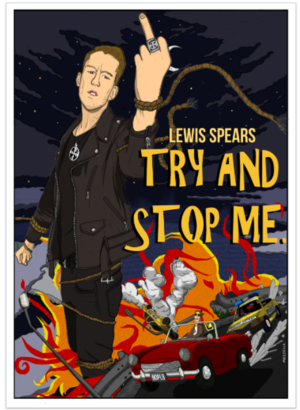 Lewis Spears is an unstoppable force.

Three years after stepping on stage for the first time, Lewis is taking his tour to New Zealand for his very first international performance. After successfully raising money to film his debut stand-up comedy special, Lewis Spears is in absolute peak form and ready to show New Zealand his best work to date.

With over 250,000 fans across YouTube and Facebook and an incredibly popular comedy podcast, Lewis is one of the biggest online entertainers in the country and singlehandedly demolishes the stereotype that people who are big on the internet suck live. A charismatic and divisive performer, Lewis commands the stage like his own personal battleground. Striking down trends, critics, and mainstream culture alike. Still completely independent and without a single fuck to give, Lewis Spears is bringing his brand of confrontational stand-up comedy to the beautiful country of New Zealand.

And if you don’t like it, Try and stop him.